How do I stop my game character from sliding on the ground?

I have some terrain, some blocks as obstacles and a player character with some mouse driven motion controls. You click the mouse on the terrain and the player character turns and walks in the direction of where you clicked until they reach their destination, so far so good.

I have recently added a rigidbody component and a box collider on the player character in order to get the character to 'bump' into walls and not simply walk through them like a ghost. This aspect is working, unfortunately the character keeps sliding on the ground. Since the terrain is at a bit of a slope the character just slides forever away as if they were standing on oil. I've been trying different solutions to get the character to stop doing this when they are not moving but nothing seems to work.

These are the things that I have tried thus far:

Increasing the Mass of the Rigidbody - No effect, actually I think the character is sliding even faster.

Increasing the Drag - This was working but the moment I added an X and Z constraint on Freeze Rotation it just stopped working and I need those constraints because I don't want the character to fall over.

Adding a Physic Material to the Box Collider - This doesn't seem to be doing anything. the physic material I created has friction values around 300 and the character is still sliding away on oil.

These are the settings for the rigidbody and the box collider currently on the character.

This is the Physic Material that I added to the player character's box collider. 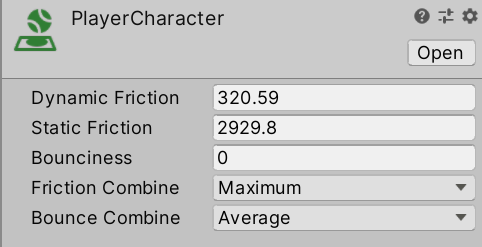 This is the code that I am using to move the character.

Can someone please tell me what I am missing? Why does the player character keep sliding away?

Browse other questions tagged unity rigidbody or ask your own question.

11
2D character controller in unity (trying to get old-school platformers back)
1
Unity Physics Material - Character Slides Too Much
2
How to make an object that has no rigidbody2d component smoothly fall on the ground in Unty2d?
1
How can i change door close/open speed in animator, and how to tell player if the door is close wait/idle until the door will open?
0
Trouble with assigning a model's own mesh to a mesh collider in Unity
1
How to completely stop the camera from clipping into the ground
0
Player disappears when it collides with a tagged object
1
When setting Rigidbody.isKinematic true collider won't work anymore
0
How to use AddForce on a capsule?
1
Problems with gravity and box colliders in Unity 3D