How can I create a DLC for Steam using Unity?

I have uploaded a game on Steam. I know steam deals the DLC as separate depots; I have also watched and read the documentation on steam documentation page.

The problem is how will I deal the DLC in my game (the coding part)? Is depot a full game and there is download option in the game? Please guide me about it as I am new in steam game development. What would be the global architecture of both my game and the DLC?

Here is the longer answer: One could use AssetBundle or the new Addressable system. But here is the catch: the newer Addressable doesn't mean it's better. Let's see the use case.

As OP has noted, steam DLC works by either just adding a new depot into user download, or no additional file download at all but use it the DLC for a license check.

This is more suitable for a mobile game which updates/distributes content regularly. It works by maintaining/downloading a catalog file, which serves as an index file to other asset bundles. Update and download them smartly by comparing local version and dependencies.

But this is not suitable to our Steam DLC case at all. Let's say you want to sell a new voice pack. For the addressable approach you would need a way to update the catalog file (changing/updating the main app, or host it on our custom server) which defeats all purpose for traditional DLC. Also Steam already handles the download for us. This simplifies things a lot, because the game only has to check for local files.

I used Asset Bundle Browser for this. Despite its name, it also helps with creating asset bundles by simple drag and drop. I wont get into details, because the tool is very easy to use. It is far easier than dealing with Addressable.

The final result will be an asset bundle file sitting in ProjectFolder/AssetBundles beside ProjectFolder/Assets. Which is good, because we are making DLC. We dont want to include them with build from start, nor in StreamingAssets. 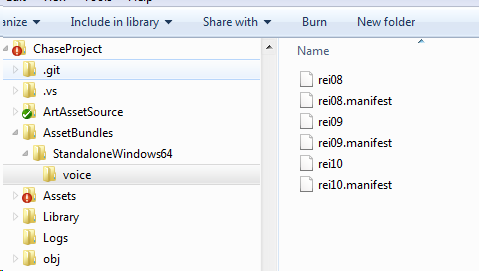 The file has no extension by default. Asset bundles do not require extensions, but you could append them if you like. The .manifest file is for editor side reporting. Ignore it when copying to production.

This example just uses file IO to iterate files in a specific location, and then uses the AssetBundle API to load and peek them. It is now up to you how to use or manage the life cycle of these asset bundles. (unload them to release memory)

Not the answer you're looking for? Browse other questions tagged unity steam steamworks .

7
How can I fetch a list of games and DLC for a user via Steam's API?
3
Do I have to commit the downloadable assets for Unity to the repo? Or a reference for the team to download them?
0
Unity, Steam and updaters!
1
Unity pattern for multiple game views
0
How can I get Steam username and avatar image from leaderboard?
2
How do I use the Steamworks API to check if a DLC is installed?