Not sure why my materials started doing this, byt when I press play, all materials on my models change to "materialsName (instance)". 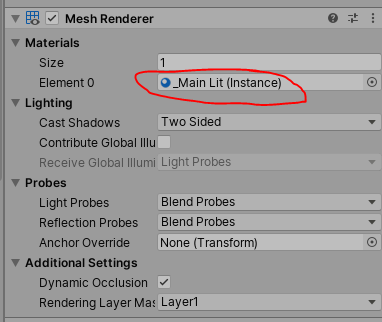 Turns out that since I wanted to modify the material at runtime, it created an instance, which makes a lot of sense. So then my questions is, what are the downsides of this? does it effect performance?

I only have 1 material for my entire game, so I batch probably 95% of my draw calls, will this effect that?

When you access a renderer's material with the .material getter, Unity instantiates a new copy of the material unique to this object — that's why you see an "(Instance)" added to its name.

The benefit of this is that now you can make any changes you want to this object's material, without unwanted effects on other objects that use the same material, and without inadvertently saving runtime modifications into the source material asset stored on disc / in your project's version control.

But it does come with costs:

These impacts aren't drastic. If you have just a few long-lived objects that need this, you're probably safe enough with this default behaviour.

But if you need a lot of objects with material variants, or you're frequently spawning and despawning objects with a modified material, then all the extra batch splits and memory allocation can add up.

Fortunately you can control when to make copies and when to avoid/get rid of them:

0
How to avoid material copying error message in Edit-mode?

0
Discarding triangles in Unity
7
How can I reduce the draw calls in a split screen game?
0
Import Material from blender into unity Export FBX
1
Managing draw calls for customized materials when targeting mobile
1
How to procedurally generate materials with text in Unity
2
How can I bake several variations of a substance?
1
How to make a changeable color constant for editor materials?