My script(MouseLookController) is attached to a GameObject and I want to limit it's rotation between 90deg and -90deg.(Rotation is 40 deg in example image) 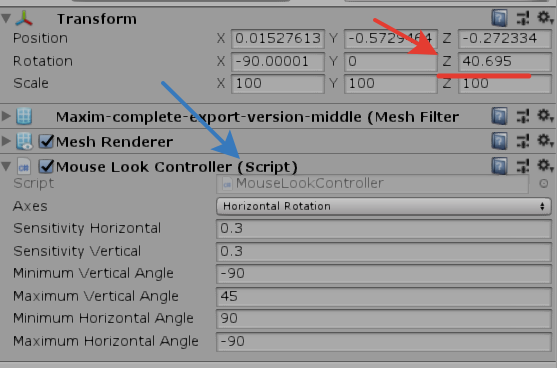 Problem is I can't access this value to check it. How can I access the rotation Z of this gameobject?

Meaning they won't return 40.695 value, where is this value currently stored?
Couldn't find it in the GameObject.

Manipulating individual components of a quaternion is almost never what you want to do.

The three imaginary components of the quaternion (x, y, z) describe your axis of rotation, and the real component (w) describes how much to rotate around it, subject to the constraint that the whole 4-vector has a length of 1 (so as you change the rotation angle, the axis vector grows and shrinks). So changing just one component doesn't make sense - the different parts of the quaternion have to change in concert.

Instead, you generally want to use the convenience methods of the Quaternion class to do your operations - which ends up making for much clearer and more intuitive code, as a bonus.

You might be able to skip the first few steps there, but myself I don't trust the way Euler angles wrap around, which can lead to unexpected behaviour. So I like to isolate just the rotation angle I care about, relative to the identity orientation, to minimize the potential for surprises in a corner case I didn't think about. ;)

0
Why rotating an object only on its local X axis result in sudden 180 degrees changes in Y and Z axis rotation values
1
Why when rotating object 360 degrees on the x, it rotates once then stops?
0
Is Quaternion math really practical knowledge for a graphics programmer?

3
How can I access a script variable from another script in Unity?
0
Access to varibles in other attached gameobject script is ambiguous
0
Access buttons individually made by a for loop (old Unity GUI, Unity Editor script)
2
Limit rotation angle
0
Head rotation according to weapon sight
1
How to make a singleton "game manager" object/class that only loads once and can be accessed from any scene?