What causes this z position change?

This is a follow-up on the following thread.

I'm applying a code that will move an object just outside the camera's frustum. I have used the same code in other projects, and it worked fine.

And I just don't see why it does that.

I have recorded a video here.

If I press the button, the cube should be moved to the left only. But it also moves to the back (z position).

And this is the script that I have applied to the cube in the video:

Can anybody tell me why my code does this? I just don't see it. Thank you very much for the help!

Edit: Here is another video that shows the camera position in the Inspector.

I'd like to expand on Jon Koelzer's answer, with a bit more detail about what aspects of the code cause this, and how to modify the code to correct it.

...you're measuring the distance along the z axis only.

But when you apply this distance to your ray like this:

...you're measuring the distance diagonally, along the direction of the ray. Part of that distance moves along the z axis, but part of it moves along the x axis (pushing the object off the left side of the screen).

Because you're dividing what was previously just the z depth between two axes, the amount that ends up in your final z distance is less than what you started with, making the object move closer to the camera with each invocation.

Then of course we move a little closer to the camera again when we apply the half-bounding-box offset, since we're moving along the frustum plane normal, and that points slightly backward as the planes fan outward.

You can fix this by not thinking about rays at all.

As for how that shiftScale is calculated - we can get it with a little trigonometry:

And the fact that since the plane normal and camera.transform.right are both unit vectors, their dot product gives us cos(theta) :)

The planes that define your frustum are canted and the amount is dependent on your FOV setting, which I've circled in red on the right in the diagram below. If I'm not mistaken, the lower your FOV, the more narrow that frustum is- the narrower your frustum is, the less your object will translate along the Z-axis.

This is just a rough sketch, but the vector Fo represents your frustumOutside variable. The Fo vector is angled and has used both the x and z elements to express this direction, that's where your Z movement comes from. 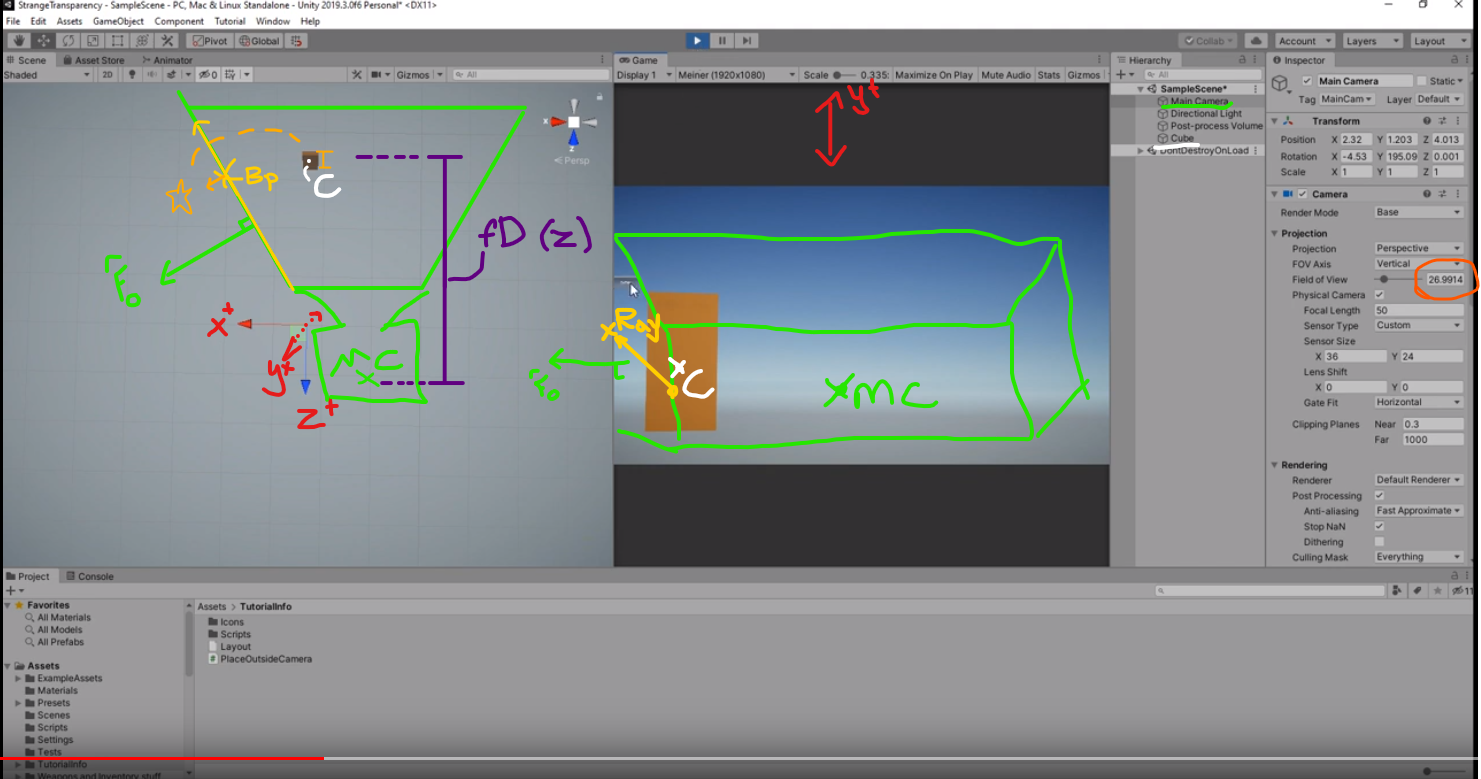 If you want to move it on x axis only then you need to restrict z axis of cube's transformation. There might be other ways to do it but the easiest way for now is

Jon's answer explains where your problem is coming from. The planes of the frustum aren't perpendicular to the x axis. I suggest a different approach:

Not the answer you're looking for? Browse other questions tagged unity c# camera or ask your own question.

0
How do I position a mesh just outside the camera view?