How to load a separate map from a text file?

I have a text file that I am using for my map for the tiles to be allocated. This works fine, but I am running into issues figuring out how I would go about loading in a different part of the map.

For example, say I wanted the character to go into a cave or building, what would be a good way to go about loading this new area?

Right now I have my handler class setting the world in my game state class, and I have tried messing around in the game state class to try and accomplish what I want but have not had much success. In that game state class I have a tick and render method, and in the constructor I have it being set.

The methods that I have tried have resulted in a new map to be loaded in, but the other map is still loaded in under this, and I know this because the character has collisions set up. This also goes along with this issue, but what would be a good way to trigger this loading of the new section of the map?

Below is the code in my GameState class. (changeWorld is based off of the X coordinate when in game, and once you reach a certain point it switches maps; this was just done for testing because it is not an accurate way of doing it).

some of your ideas are good, some are terrible...

as you are a beginner i suggest you try to achieve something like a M-VC (Model-View-Control) to separate your game logic from your drawing tasks.

on the other hand it seems to be a good idea to update your game (your model) frequently using a tick() method - but keep in mind that you update only model values within the model (not controller or not on view) - maybe you trigger the GuiListener but that would be all. 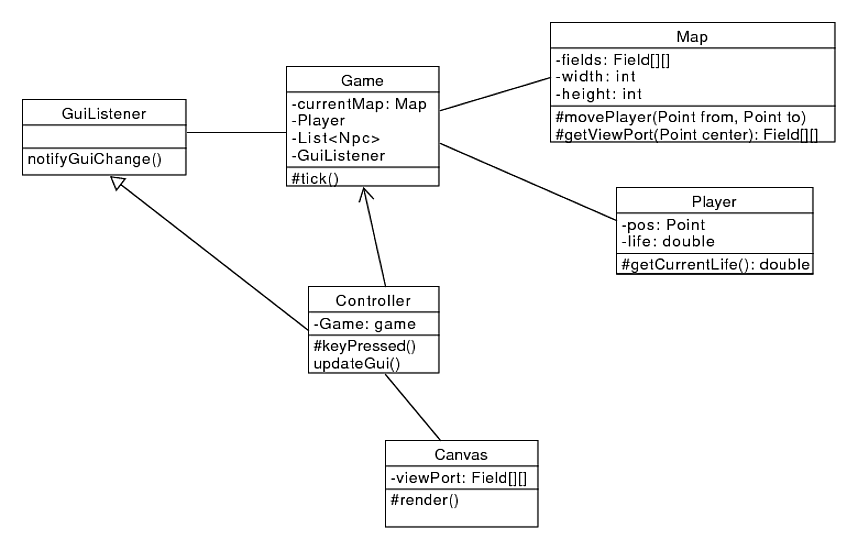 i'm not sure how you do implement input handling so i come up with this idea: Input Handling is done in the controller and delegated into the model. This is done by creating first a GUI and add ActionListener on the widget, maybe a keyListener for input on Keyboards or an actionListener on a button. These Inputs are delegated to the model and the model reacts to these changes

User Input
the User presses a key (or a Button) on the GUI and this event is catched by the correlated Listener. this Listener is located inside the Controller:

that was all what happens on controller side - the input is simply delegated to the model!

Game reaction (finally he talks about how to load seperate maps!!!)
now the Input Event has come into the Model (aka the Game). The model updates it's values according to the input

the changes from the controller are now properly handled and the map has been updated as soon as the player enters the teleport location (stairs to the basement). Even more, the player is set to the proper location on the new map.

instead of using x/y-coordinates it seems very helpful to create a Data Object that encapsules these valuse: a Point!

UML-Diagramm of Point
its much smaller than all this code and can be changed easier: good for playing with design/architecture/data models

Not the answer you're looking for? Browse other questions tagged java 2d tilemap .

0
Adding JavaFX GUI to an MVC based terminal card game

5
XNA 2D: How to load/unload specific content by level
0
Map handling - Indoors/Outdoors and loading large maps
2
How to make different layers in a 2d game map
3
Tile map propagating fire
0
How can I smoothly move from tile to tile?
0
Open world game state saving Android
1
C++ SDL2:2D tilemap with every tile has its own behavior