How to avoid obvious triangle pattern when shading 2d quads?

I'm in the very early stages of writing a 2d tile-based game using Allegro. I've hacked the Allegro source to allow me to specify tint values at each corner of a bitmap, however the resulting image has very obvious patterning where the quad for the bitmap has been rendered as two triangles: 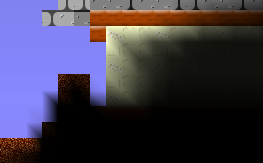 As you can see, there are clear diagonal patterns going from top-left to bottom-right of each quad.

I'm not really sure of the correct terms to be able to search for a solution...

Are there any techniques I can apply to avoid these sorts of artifacts?

UPDATE: To show an example, here is the lighting system with all corners red, except for the bottom-left green: 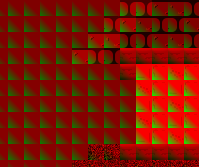 And now, here's the equivalent with all corners red apart from the bottom-right green:

You can see the patterning is very different - not simply a 90 degree rotation.

Here's some of the Allegro code I modified: https://github.com/stu-smith/allegro5/blob/al_draw_corner_tinted_scaled_bitmap/src/win/d3d_bmp.cpp#L187

Answering my own question here, based partly on some hints given in the comments (thanks!), and partly figuring things out on my own...

The eventual route I took was to scrap my modifications to the Allegro source, and instead render the lightmap using shaders.

As a bit of background: I compute the lightmap for the entire world "offline" in a separate thread.

In the render loop, I take just the visible area of the lightmap (plus an extra tile all around) and draw that to an Allegro memory bitmap.

I can then provide that bitmap as a sampler to the shader that will draw the tiles.

The trick is to realise that you can take the special al_pos vector from the vertex shader, that gives the screen position, transform it according to the offset and scale of the overall tile drawing and pass it through to the fragment shader, to be used as a texture coordinate of the lightmap sampler.

This is very simple: just look up into the tile texture, and the lightmap sampler, and combine them.

Or to think about it another way: I stretch the lightmap over the entire window (and then some). The scale and offset calculations simply work out exactly how it is positioned.

Not the answer you're looking for? Browse other questions tagged allegro triangulation or ask your own question.

8
How can I implement smooth tile-based lighting?
4
DirectX11 - Color Interpolation Along Quad Diagonal
0
How to write properly shader with gradient based on vertex-color?