Getting user id from one scene then to the next scene

I'm new to multiplayer and photon so pardon me if this question is somewhat frequent.

I have successfully set up my project to start from a main menu - waiting room - actual gameplay scene. However I couldn't search my way through getting a sort of user id from waiting room(ie; order of user joined to waiting room) then use it in the gameplay scene to manipulate sort by score / by hp / etc.

Perhaps I got the while concept of having to identify unique players via such variable? I'm not quite sure. I just got my foot in the multiplayer development realm, so please go easy on me. 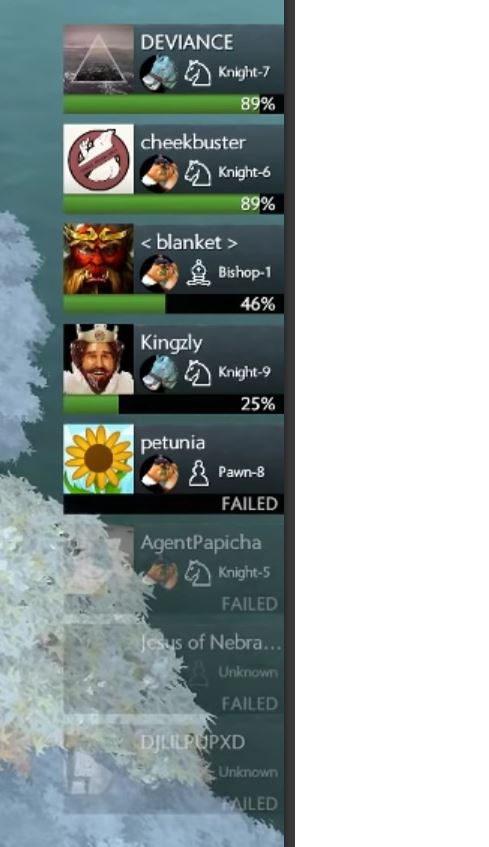 Sorry for my initial question being quite vague. Basically, I'm trying to replicate this with Photon. I've got various things set up but was stuck at where designating individual players to individual player info panels as if captured(Get WHAT to connect to those UI elements I've got set up).

It'd be simple enough even for me if this was a singleplayer, but since it's not I'm also refactoring a lot on the way as well. Thanks to both of the answers given so far I'm looking into Photon UtilityScripts(To a novice to anything simply directing where to look helps a ton, so thanks again), but since I'm not quite there yet I'll update my progress.

If you're using Photon, you should be able to set each user id in one of the following ways:

Once authenticated, a Photon client will keep the same UserID until disconnected. The UserID for a client can be set in three ways:

So basically, if you don't set it, it will set a userID for you.

You can then get the userID for each player to be published to each player in the room by setting RoomOptions.PublishUserID = true, and finally getting the UserId with PhotonPlayer.UserId

Players can share their UserIDs with each other inside rooms. To enable this and make the UserID visible to everyone, set RoomOptions.PublishUserId to true, when you create a room. The server will then broadcast this information on each new join and you can access each player's UserID using PhotonPlayer.UserId.

Then using it across different scenes, you will want to store it in a script Component on a GameObject and use DontDestroyOnLoad(this.gameObject) in the Start() function for this script. This will cause the script to stick around between scenes. (Be careful with this though, you could end up with multiples, so make sure it's only created once) See the docs for DontDestoryOnLoad here: https://docs.unity3d.com/ScriptReference/Object.DontDestroyOnLoad.html

If you want to keep track of the order when users joined the room (which should actually not matter much) you just need to keep track of them when they join the room. Photon is providing the player with OnPhotonPlayerConnected(PhotonPlayer newPlayer). You can set the time when they joined the room in the custom room property if needed with a time stamp. Let the masterclient handle it or let each client write it when they arrive. If you want to get a whole list of them at once, you can access them via PhotonNetwork.playerList.

PhotonNetwork persists between scenes and there are a few example tutorials provided directly by Photon. It's worth checking out both Pun and Pun2, since the examples they have are slightly different (Pun has for example a simple Rock-Paper-Scissor game which is missing in Pun2) but the code is almost the same.

And if you want to use something for displaying as scores, you should not use the userId but instead PhotonNetwork.player.NickName. The userId is unique, the Nickname is usually what the player is itself choosing and does not need to be unique.

I assume your game is round based (looks like auto chess or similar). Each player could just report his own stats after each round with PhotonNetwork.RaiseEvent(TOKEN_UPDATE_SCORE, payload, true, new RaiseEventOptions() { CachingOption = EventCaching.AddToRoomCache });. You need to subscribe to PhotonNetwork.OnEventCall += OnEvent; where public void OnEvent(byte eventCode, object content, int senderId). All clients are getting that way an update of the score after each round (or whenever you call it)

Not the answer you're looking for? Browse other questions tagged unity multiplayer photon or ask your own question.

85
What is the proper way to handle data between scenes?

0
Unity 2D: Change one instanced prefab then make all the others on the scene like it
1
Three button combination to open next scene
0
Photon disconnected without any error/warning message
1
fading from one scene to another not working
0
Why when getting random index from a List the index is higher then the List count?
2
Bizarre Physics FixedUpdate Lag spikes