I want vertical lines to be drawn as vertical lines regardless of their position relative to the camera (distance/offset). I want the projection to be perspective so the furthest objects from camera look smaller while keeping their respective proportions.

What am I trying to achieve: A two (vanishing) point perspective like this one http://insidetheoutline.com/wp-content/uploads/2019/07/2_Point_Perspective_Cityscape.jpg

Why am I at it: I'm really bad at 3D (obviously) therefore I'm trying to replace character models with 2D sprites like in Populous 3, or "The Game" quest in Fable 3. I also want to have a top-downish view like in isometric games. Alas, perspective distortion totally kills the effect, making sprites look skewed whenever they are off-center.

What am I doing right now: 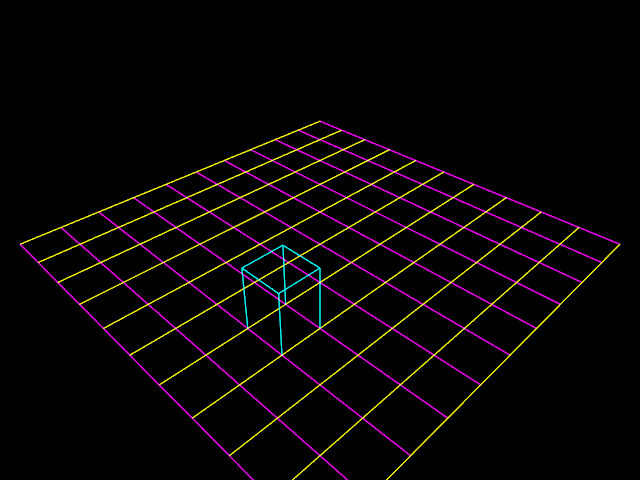 The rightmost vertical line--the one that aligns with screen center--is vertical, just as I want all of them to be, but the others are skewed away.

What else I managed to google: Not much, really. I found an example that kinda looks like something I want to achieve, but they place the camera at ground level with zero Z delta, effectively eliminating the third vanishing point. In some other example, they just narrowed FOV to some absurdly low value, making it look like a two-point perspective to some extent.

I'm afraid I'm missing or misunderstanding something. I also not sure if the desired output will, in fact, look like I want, and I won't discard it if it's not.

Unfortunately, this means that the horizon line will be at eye level with the observer, i.e. in the center of the screen. If most of the action happens below that horizon line, you'll end up with half a screen full of sky. To fix that, you have a few options:

1. Keep the camera as it is, but shift the entire view up.

This will cause the horizon to move up on screen, but also changes the projection center, so the viewer will have to move his head up as far as the horizon moves to see an undistorted view again. Note that people are actually rather used to viewing screens at an angle, so this might be tolerable in certain cases.

To do this, modify your code as follows:

This is a rather unorthodox position for glTranslatef to be called at, but it's perfectly legal and should do exactly the right thing. The effect of this is essentially to "scroll down" on the screen.

2. Tilt the camera slightly down, and tilt all your sprites by the same angle.

This one is a pretty cheap trick to make verticals look vertical again, but it can be very effective if the art style supports it. Try it and see if you like it.

3. Tilt the camera down and draw sprites untilted.

Yes, vertical lines will not be parallel to the screen borders, but you'll deal with it, because that's how perspective works in real life. Take a photo at an angle, verticals will be crooked too. If it really looks that wrong to you, try adjusting your FOV setting to match your real life FOV as determined by your chair and computer screen, and move the camera farther away if necessary.

4. Put the entire UI on the top half of the screen.

This solution is perfect from a perspective math standpoint, but its applicability severely depends on the type of game you're making. If you have a UI-heavy game with lots of menus and buttons and windows and stuff, the sky is free real estate. If your game is a minimalist RPG, then this solution is not for you.

5. Combine several of the previous options.

All these options are more or less compatible with one another. It's up to you to determine by experiment which combination suits your game best.