I am making a voxel based terrain system (Yes, I know, very original...), anyway...

Each voxel should have it's own color so the player can distinguish which type of material it is. For example: dirt would be brown; grass, green and stone would be gray.

I don't really understand marching cubes, so I come to you guys with my issue. I want to be able to color each vertex based on which voxel it would visually make sense to belong to. Edit: To clear things up a little. The voxel contains the color data, I do not wish to generate the colors (like how some systems automatically apply a stone texture based on the height/slope of the face)

How would I go about doing this?

Here is the code I am using for marching cubes, as I have said. I don't understand marching cubes so this code wasn't written by me.

Original Source of the Code Here

Also note that the code below has been edited to pass in the color data for each Voxel.

Example of what I tried

I have already tried assigning the color based on the current cube being processed, it did not give the result I wanted, take a look at the image below, notice that the corner of some voxels are white instead of gray, this is because of the way I implemented colors the first time, those vertices are technically generated from an air block but should visually belong to a stone block.

(Ignore the weird glitches in the terrain, that is something I have already fixed, it was with the way I was generating the terrain) 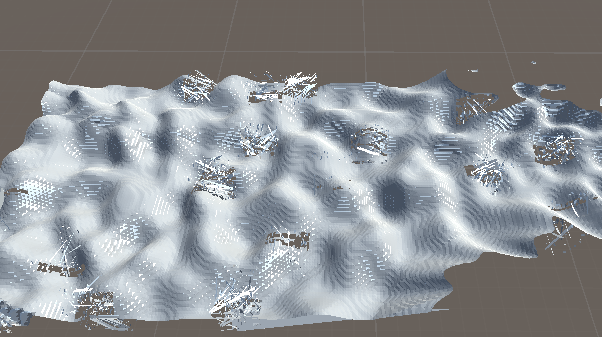 After a few hours of searching:

I found what seems promising in an answer here

However the answer doesn't explain how blockIds work or how to get vertIndex.

I am really at a lost on how to solve this problem, I'd really like someones help. I'm sure there are probably other people with the same questions as me, I am honestly surprised there is absolutely no direct documentation on this (at least, to my knowledge there isn't).

I will be reading up on marching cubes and trying to figure out how to maybe implement colors.

I think I'm almost there!

So the answer I linked to in the previous edit, where I said it looked promising, I finally was able to understand some of it. And from what I understood I made the code below:

The code above ALMOST works, it's very frustrating. When I run the code, it runs through the loop about 8 times before it encounters an Argument Out Of Bounds Exception, I debugged it and apparently in one of the situations the "mats" array doesn't contain any zeros, which from what I understand shouldn't be possible. The theory behind the code above is that one of the indices (either indexA or indexB) should point to a zero in the mats array, because in theory one side of the equation is always zero (or air).

I don't understand what I did wrong... I know at this point it has to be the way I am generating the voxels, it might also still be that code but I need to first solve the issue where none of the ints passed into the mats array is 0.

Here is the code I am using to generate the terrain:

So I wasn't able to fix this issue, and it seems nobody else on this forum is going to as well. So I decided to go with a much simpler solution, basically, I dropped smoothing the terrain to just binary smoothing. Either a cube is off, or on and there are sharp slopes between that. it makes the terrain look blocky but it's the best solution for how I fixed the vertex colors. I fixed the vertex colors by first checking if the current cube is air, if it is it chooses the material of the first neighbor that isn't air.

If anyone has an answer to this question in the future, I am all ears.

I gave this issue another shot, and I found a solution!

I figure that this will probably be helpful to someone in the future, so I will describe exactly how I did it, I will provide minimal code though, because my solutions code is a tiny bit implementation specific.

Credit Where it is Due

This answer was made possible by this answer here. In fact, my answer is basically just going to explain the stuff I was confused about in the that answer and what I did to fix it for my implementation.

The code I ended up using

An explanation of how I fixed it

So in the answer I linked to, his least to most significant vertex order was different than the Marching Cubes implementation I used.

I was able to fix this thanks to the presence of 2 arrays.

Here is an example:

That means the value I needed for ColorSelectBits[0] is 0x67

Not the answer you're looking for? Browse other questions tagged unity terrain voxels marching-cubes .

9
How to texture a surface generated by marching cubes algorithm?