Is it possible to move buttons or other ui elements over each other dynamically in Godot?

What im trying to do is have it set up so that if the player clicks on a character their ability's will appear on the ui, but i want to use the same ui space for the other characters as well.

So is it possible to have multiple buttons in the same area and then depending on which character is selected only the buttons connected to that character appear?

Thank you in advance for the help.

To answer your question as written, yes, you can have multiple Control nodes sharing the same space, and only set one to be visible at a time. 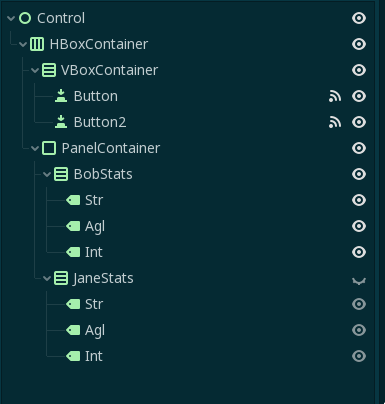 Note that BobStats and JaneStats are sharing the same PanelContainer, but only BobStats is visible. I've wired up the following signal connections:

There's a node called a TabContainer that is specifically designed for showing one control at a time: 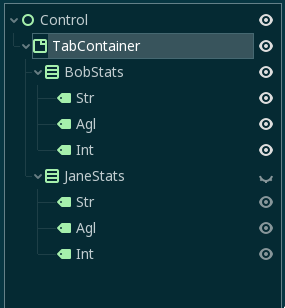 However, based on how you've described your question, I'm thinking you don't actually want multiple controls sharing the same space, but rather a single set of controls whose values you modify when a particular character is selected.

Not the answer you're looking for? Browse other questions tagged godot or ask your own question.

0
Select a block of tiles from tilemap by click and dragging
0
How to make a 3D mesh invisible in Godot?
0
Can't find sibling node, keeps giving "null instance"
0
How to prevent top down sprite snapping during diagonal movement upon keyboard release
1
How to stop a signal from being sent
1
How to make it so the game waits on player input for a dialog system in Godot?
2
Trying to understand 3D transforms by making an aircraft control script. How would you implement 3D transforms correctly in this example?
2
Extra constructor call when using inheritance in Godot