Is it normal for the baking timer in Unity to increase?

I'm having an unusual reaction from trying to bake my scene for Occlusion Culling (the scene was starting to lag and I thought this would optimize it) and I wanted to ask for advice.

What's happening: This scene and the previous scene are very similar in structure and appearance, only one scene has 2 large models in it. I selected every model/object in the scene that wasn't a character, or had any animation, set it to static, then clicked 'bake' (according to the tutorial I was following and the previous being very successful) and this is where it starts going wrong.

In the previous scene, beside Auto Generate Lighting On is a loading bar, which had 126 Jobs Remaining and took about an hour and a half to do (I was watching a show and each was 30 minutes long, I saw 3 before it completed) but this time, it showed:

And when it first started, it had 9 hours instead, then spiked up to 11 after 30 minutes. I'm not sure why there's such a dramatic difference between the two and with my very limited experience on this, I wanted to ask for advice from more experienced Devs.

edit: This is a screenshots of everything that appears in the static dropdown menu: 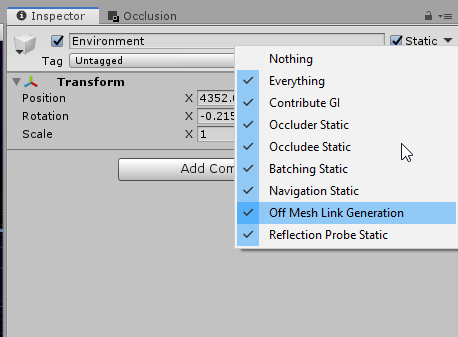 Browse other questions tagged unity scene or ask your own question.

2
NavMesh.SamplePosition() fails after rebaking NavMesh?
2
I'm very new to Unity, is it all scene/script based?
0
Need advice concerning the creation of open world game in Unity 3D
2
How can I make tree foliage work with baked lighting?
0
Setting up a low res viewport to stretch in Unity
0
After baking my lights again in Unity, my character is black?