In that game, I want to play a sound anytime my Player collides with a gameObject with a specific tag.

The MainCamera has an Audio Listener and I am using Cinemachine Free Look, that is following my avatar, inside the ThridPersonController (I am using the one that comes on Standard Assets - but I have hidden Ethan and added my own character/avatar).

The gameObject with the tag that I want to destroy have an Audio Source: 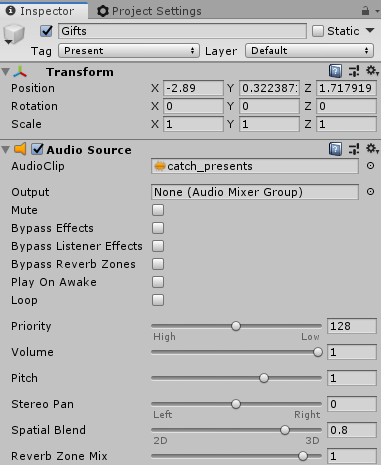 In order to make the sound playing on the collision, I started by creating an empty gameObject to serve as the AudioManager, and added a new component (C# script) to it:

And created the script Sound.cs:

After that, in the Unity UI, I went to the Inspector in the gameObject AudioManager, and added a new element in the script that I named: CatchingPresent. 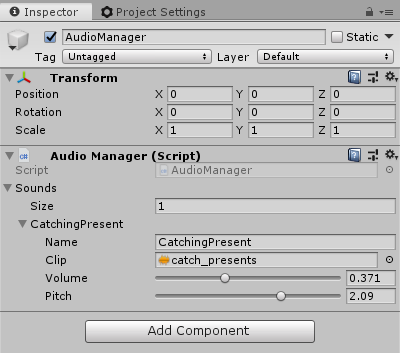 On the Third Person Character script, in order to destroy a gameObject (with a specific tag) when colliding with it, I have added the following:

It is working properly as that specific object is disappearing on collision. Now, in order to play the sound "CatchingPresent" anytime the Player collides with the object with the tag, in this case, Present, I have tried adding the following to the if in the OnCollisionEnter:

But I get the error:

The type or namespace name 'AudioManager' could not be found (are you missing a using directive or an assembly reference?)

But I get the error:

The name 'AudioManager' does not exist in the current context

As all the compiler errors need to be fixed before entering the Playmode, any guidance on how to make the sound playing after a collision between the player and the gameObject with the tag Present is appreciated.

Reformulated the approach that I was following and solved the problem by simply adding an Audio Source to the ThirdPersonController (with the AudioClip that I wanted to call) and added GetComponent<AudioSource>().Play(); to the if statement as it follows:

Not the answer you're looking for? Browse other questions tagged unity c# collision-detection audio .

0
Trying to use yield to wait for a few seconds to avoid the sounds from Interfering with each other
1
Gameobject not destroyed OnCollisionEnter
0
ERROR: MissingComponentException
0
Player tag does not respond to AddForce
-1
Player light color he collects before checkpoint is getting reset when he restarts at checkpoint
0
Player disappears when it collides with a tagged object
0
How can I tell if a Gameobject is currently touching another Gameobject with a specific tag?
1
AudioSource.Play() outputs only noise from the sound clip