I'm a .NET Core web developer trying to learn Unity. In web development, if I want to perform more than one domain function at a time, I either want to run it as a totally separate service (disjointed/microservice) or as a separate process (sidecar). In .NET Core we have IHostedService and other varying hosting abstractions, so creating small sidecar processes is fine, and in 3.0, even ASP.NET Core is considered a sidecar process because it's building on top of IHostBuilder for Generic Host support. My web development experience is primarily focused on distributed backend systems.

In my process of trying to learn Unity, I'm trying to understand how networking works in Unity. I was looking at their NetworkManager documentation, it seems most helpful for integrated host/client systems. I like that I can provide custom implementations of NetworkManager, and I think that will be most helpful. I've been reading up on asynchronous programming in Unity, and looking at their ECS Job System. It looks useful, but it also doesn't seem to be quite what I'm looking for. I'm looking for a background/sidecar process architecture the main Unity thread can call into as needed, but that doesn't interact with the main Unity thread at all, only it's lifecycle is tied to the main Unity thread.

In the asynchronous multiplayer game I am learning to create, the game's world is going to be a dedicated server running remotely, and the client will have to connect to it to load it's internal state. As the game's remote state is primarily near real-time, I was thinking about implementing a mixture of real-time and cached network managers. Something like this:

For my CacheHostSidecar, I want to run it outside of the main thread as a sidecar process, so it doesn't affect the game client's core performance. The primary goal of the internal cache is to handle the network sync so client updates are real-time once the cache has been warmed, and then the cache updates it's internal state separate from the main unity thread on a ticking basis. 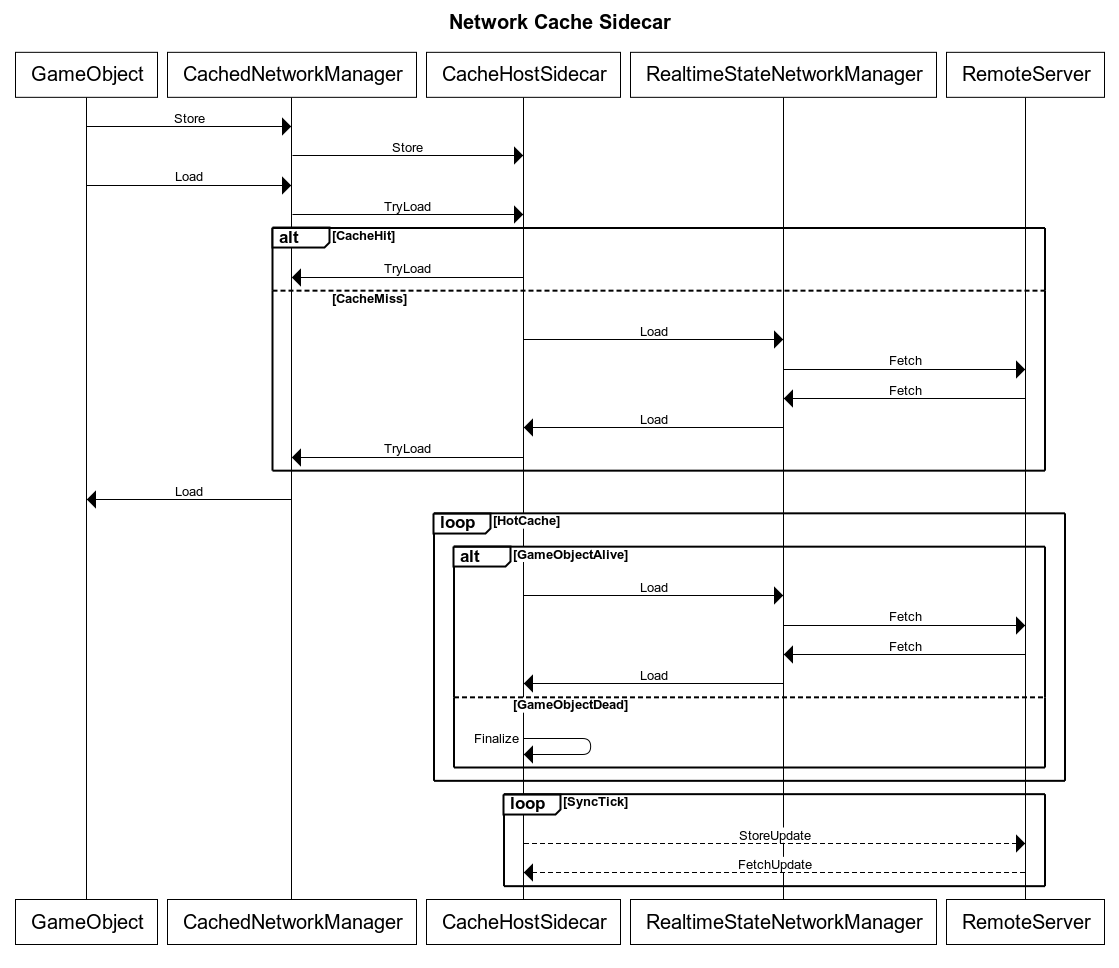 My hope is that by decoupling the core networking functionality from the main Unity thread, it helps folks with poor network connections have an agreeable experience as the networking stack is implemented in a more sustainable/modern way, ensuring they can still play well enough in a game requiring an internet connection.

11
How to handle netcode?
0
Client/Server game even in solo: any big problem?
2
Java network game - synchronize state
13
How would a game-state snapshot system be implemented for networked real-time games?
12
How do you allow networking code to be written in the later stages of the development?
4
Creating a master server for Unity game (Unity 2017)
0
How to deal with race conditions on a game server between network and physics update loops?
0
Mirror Create Player From Client and Change Scene