Health bar without image collapsing to the centre in Unity 2D

I am trying to create a health bar that collapse symmetrically to the centre. The color palette of my game is minimal and the health bar is only one color that does not change with size. I am new to Unity and am not sure how to achieve this.

This video uses a GameObject with an Image component, adds the health bar sprite to the image, makes the Image type fill and then changes the fill amount from the script.

I have two questions for my particular case,

tl;dr: control the size of the health bar by changing its scale.

Using an UI Image is just the easiest and most lightweight way to get Unity to fill a rectangular canvas area with colored pixels. So it's the optimal thing for your use-case.

If you do not want to draw a proper health bar image yet, you can simply create a new UI image and not assign any sprite asset to it. If you leave the source image blank ("None (Sprite)"), then Unity will visualize it as a solid color rectangle in the Color you assign to the Image component in the inspector.

If you want to do a health bar which fills up and depletes, then you should first create the background as a black image and then the filling as a child of that image in the color you want. Use the Width and Height of their Rect Transform to control their size. Make them the same size, or make the filling slightly smaller so you get a visible border around it.

The filling (set to 65% full by changing the Scale.X): 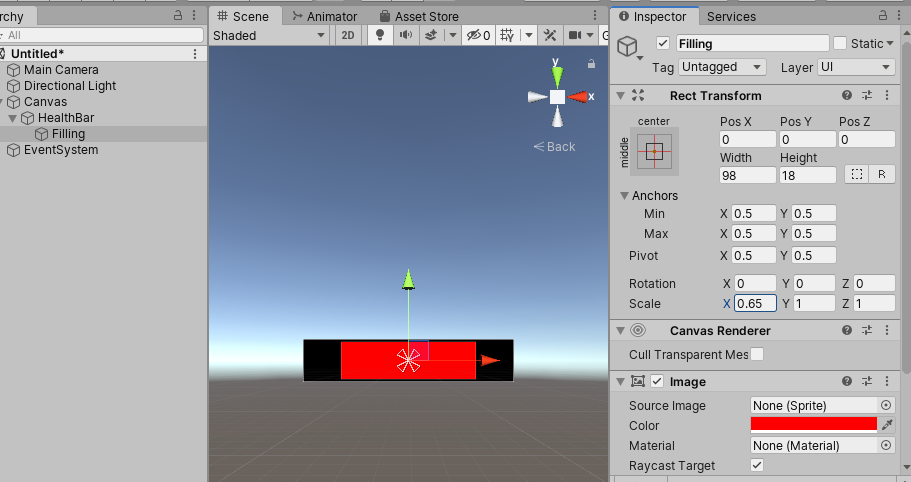 You can control the direction from which the health bar fills by changing the Pivot and Anchor in the Rect Transform of the child. The default value (both 0.5) already gets you the behavior you describe (collapsing to the center). If you want it to collapse to the left, for example (like most health bars do), set the Pivot X to 0.0 and the Anchor Min X and Max X to 0.0. You will have to correct the Width and Pos X afterwards because Unity might change those during this process.

Variant with health bar collapsing to the left:

Not the answer you're looking for?Browse other questions tagged unity animation gui image or ask your own question.

4
Need to produce an animated texture of Water where each image tiles in all directions
0
Scaling a GameObject for a progress bar representation
0
Unity Button Without an Image?
0
How can I scale my UI elements to the lesser screen dimension in Unity 5?
0
Synchronization between server's value and the one showed in a stat bar (health, stamina, mana…)
1
Creating a UI health bar image for each enemy object
4
How to make a palette swap shader that works withn non-pixel art sprites?