Rotating a parent rectangle to align child with target

My beautiful drawings will explain better than many words (or at least I hope):

In this situation my sprite will be rotate of 0 degree. 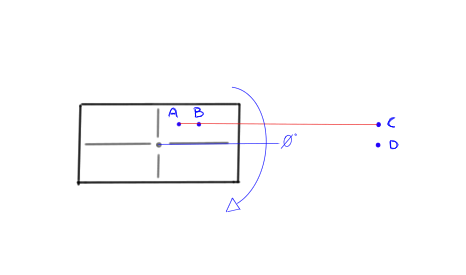 In this second image there is the question. I want to find the rotation of my sprite (-10 degree in the example) knowing the Vector2 destination D and of course all the coordinates of the 3 GameObjects. 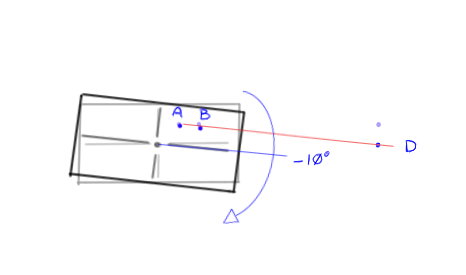 The situation is simple as long as the player rotates the weapon, but in this case is the AI (after finding the player at the point D) must turn the weapon in the right direction. I know how to find the direction between one point and another, but between two decentralized points and a third one messed up my brain.

I really don't know which "direction" to take.

Rotating sprite to line up with target can be achieved through the Transform.LookAt method provided by Unity, however this alignment will be based upon sprite's center, and we would rather have the target aligned with an arbitrary point within the sprite. We'll call this point firepoint, as in the case of a gun or cannon sprite, where projectiles need to be fired from a specific point and not just the center of the sprite.

Basically the Transform.LookAt nearly gives us the correct rotation, we just need to translate it. Currently it is aligning sprite center with target, and instead we want firepoint aligned with target.

This can be illustrated using the diagrams you provided:

Looking at the diagram above, imagine that we have been given our target as point C. To align firepoint and C, we need the sprite to LookAt D, the point that exactly offset away from C. 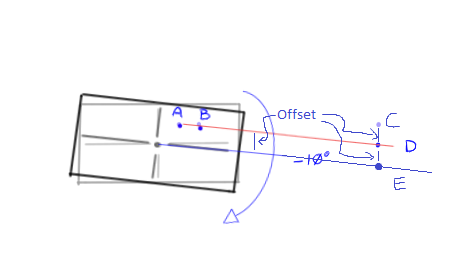 Looking at the above diagram, which I have shoddily modified, we have a target D, also I have added an offset target E below point D by amount offset. By LookAt'ing the rect towards offset target E we will end up lining up firepoint with the target.

Further information can be found in the Unity Docs on LookAt, as well as in this Unity forum thread where users discussed how to recreate or use the LookAt function effectively in a 2D context.

Not the answer you're looking for? Browse other questions tagged unity mathematics rotation or ask your own question.