I have written a fragment shader, on a shape which is a square made with gl.TRIANGLE_STRIP, and which displays a radar: 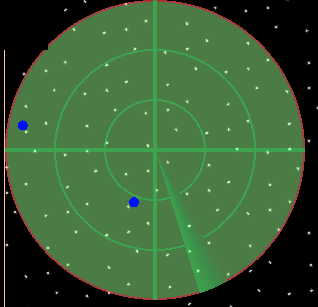 To build the radar, I'm using distance from the center of the shape.

Currently, I'm using gl_FragCoord and have to pass the shader the size of the window, the position of the center of the radar, in order to determine where I am in the shape. I'm not really OK with that..

I would like to know if there is a better way to make the shader, to make it independent from display variables.

For example I thought I could use gl_PointCoord whose x and y coordinates goes from 0. to 1., but it requires to use GL_POINTS... I could give it a try by using GL_POINTS, but I'm not sure it's THE best solution.

For example, I could make a 3d scene, with lot of cubes, and display this radar on the faces of that cube. If the shader isn't independent from gl_FragCoord, it feels like it will be a nightmare to make it work.

Is there a way to get the relative position of the pixel we are giving the color, in the shape (triangle) we are rendering? Do you have suggestions / tips?

Browse other questions tagged shaders webgl or ask your own question.

18
How can I debug shader programs?
26
For voxel rendering, what is more efficient: pre-made VBO or a geometry shader?
6
Using a GLSL fragment shader to draw a texture in the middle of a quad
5
How to get the texture coordinate of a neighbouring pixel for a blur shader?
0
Creating a fragment shader to darken a white texture over time - OpenGL GLSL
0
(WebGL) Point light per-fragment issue
1
How to fix model matrices colliding in vertex shader?
0
Fragment shader coordinates: Displacing pixels and texCoord problems