Higher order splines for use with pathfinding

In this page, Amit explains that splines can be used to achieve movement on a found path.

In the picture below, he explains that:

What are exactly high order splines? How to achieve the light blue movement? 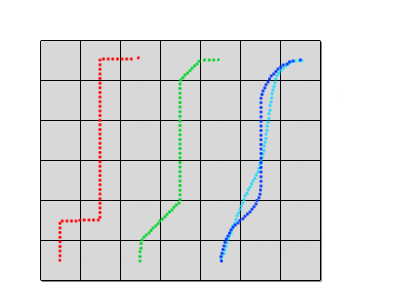 A spline is a curve built from a number of conjoined polynomial equations. Higher order splines are splines built of higher order polynomials. Generally speaking the higher the order, the more fluid the curve (sort of), with linear splines being a series of straight lines.

Here are some examples or different orders (from the Wikipedia page on Bézier curves, a type of spline).

These GIFs show generally how these curves are constructed, and higher order = more control points. In Amit's example, those control points are consecutive points along the path, so a higher order spline means that there is a smoother interpolation along a larger set of those points at a time.

Put another way, instead of looking at just the next point to move toward (linear), it might look at the next two points (quadratic) or next three points (cubic). This allows for more natural movement of your game entities along the path that has been constructed - the underlying logical path doesn't change, just the actual movement on screen.

There is more information on the Wikipedia page about how to construct these curves.

Not the answer you're looking for? Browse other questions tagged movement path-finding splines .

12
Triangulation A* (TA*) pathfinding algorithm
10
2D pathfinding - finding smooth paths
2
Overlaying grid for pathfinding
2
How to follow object on CatmullRomSplines at constant speed (e.g. train and train carriage)?
1
Constraining Movement to Path/Splines
2
How can I constrain motion to a path formed from multiple splines?
0
Spline type to achieve a specific result
0
AI not pathing correctly with pathfinding