How to render line renderer or trail renderer above UI canvas

I want to create a line renderer and also trail renderer that would follow touches but both must be rendered above my UI canvas — how can I do this?

Is it possible by using line or trail with a "screen space overlay" canvas? If yes, then how could I make line/trail follow the touch position in such a setup?

I tried this before but i was not able to make it appear on screen rather it appeared on world as if it is ignoring the overlay canvas.Then I switched to screen space camera and this problem arose.

If you want to render things in front of UI then you can't achieve this with "Screen space overly" here is the reason.

So we are having two choices to chose from:

To achieve such a effect with world space its too easy to do, You just have to change sorting order or Sorting layer of the object to render it front or at back of the UI. 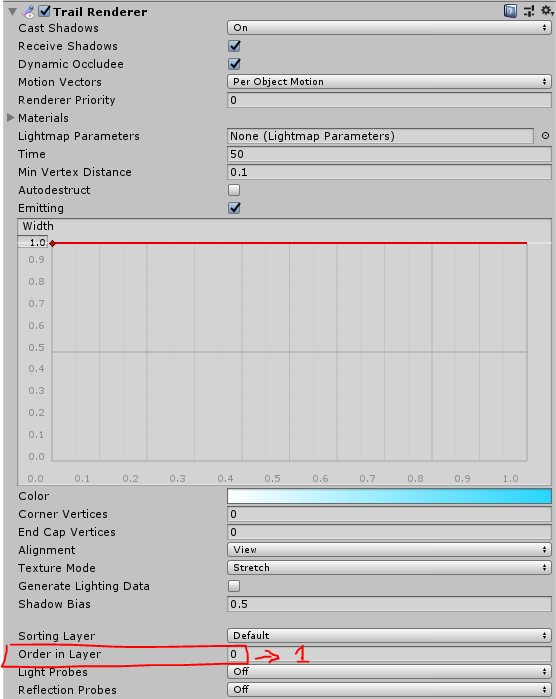 Or we can achieve this using Sorting layer. In order to use sorting layer then you have to create multiple layers. By default there is only one layer called "Default".

To create more layer you can click on Sorting layer - Default and then Add Sorting Layer.... And then just add the layers you want...

For "Screen space - Camera" same mathod will be applied like in World Space.

I hope this will resolve the quires you have about sorting layer and sorting order and canvas render mode etc.

I needed to use Screen Space - Overlay (line renderer will not work with this), so I wrote the following code to simulate a line between two objects (it is a gameobject prefab with a black square Image component, nothing else)

Not the answer you're looking for? Browse other questions tagged unity c# gui trail-renderer line-renderer .

1
Unity 4.6: Position jumps when switching Canvas render mode from Overlay to camera in code
0
How to achieve dotted trail behind moving object with use of Trail Renderer?
0
Setting object position in screen space - camera
1
UI and line renderer layer order when using screen space - camera
0
Showing a mesh on a Screen Space Overlay
0
How to fix 'procedural skybox' visible horizon line on 'screen space camera' canvas?
0
Unity UI's Image component renders without anti-aliasing?
2
How can I render 3D objects and particle systems in front of a Screen Space - Overlay Camera?