To split or not to split large 3D objects?

I have a fairly simple question for which I'm seeking guidance:

Should large 3D objects be splitted into smaller ones? 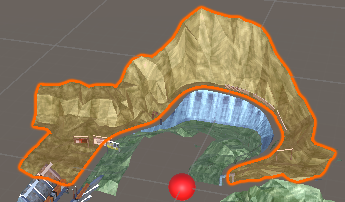 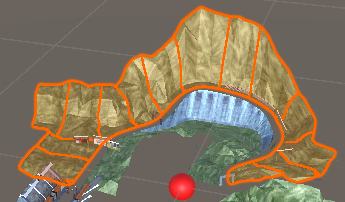 Note, these objects aren't complex by today standards, that mountain is less than 1K triangles and a complete level is likely to be less than 30K triangles.

Ideally, I would like to have the least amount of objects in the scene hierarchy to keep it simple, but at the same time I am wondering whether or not over simplifying the level might put extra problems on the table I haven't thought about.

This question is actually anything but simple :)

There are several advantages to splitting a large object, but they are situational:

But if these situations do not apply to your case (the whole object is usually on the screen at once, all of it is seen from roughly the same distance and there aren't many potential collisions with it), then it is usually better for performance to keep the whole logical object in one physical object. In fact many projects go the opposite way. They go out of their way to unify many small and simple static objects into one large and complex object at runtime in order to improve performance (this is called "mesh welding" and there is a handy utility method for it).

Now you might be more confused than before. Sorry about that. But if you aren't sure what you are supposed to do now, remember the old saying in software development: Premature optimization is the root of all evil (Donald Knuth). Do not waste time and energy on optimizing things in your game when you don't yet know if you even need that performance. Create things the way which is most comfortable for your development process. If you later down the road encounter performance problems, analyze them. And if you find tangible proof that this mountain ridge is indeed the culprit, then you can still consider how to make it more efficient.

I am looking forward to playing your game.

Not the answer you're looking for? Browse other questions tagged unity 3d optimization 3d-meshes or ask your own question.

1
Is there a difference between using one large mesh with 100k polygons and using 1000 meshes with 100 polygons each?

9
How to draw a 3D world with lines, more like a sketch drawing or cartoon
1
Which nodes of the Collada DAE are most relevant for game object/character use?
1
Unity Transform.Position not returning expected position
1
How to combine tiles in a procedurally generated level in 2D tile based maps?
0
Objects rendering only on editor, but not on build (they get invisible)
0
A trigger collider in Unity doesn't allow the player to pass through
0
Architecture for defining large numbers of meshes at runtime
0
Check whether a vector is to the left or right of another position
1
What's the generally accepted way to coordinate game events between objects?
0
Unity Rendering (Bug): Objects rendered as multiple instances after repositioning