How do I detect collisions between a point and a sloped line?

The character in my game constantly falls due to gravity, so i have to detect the collision between the bottom point of the character and the tile slope line on the same x coordinate.

The character must stop just on the slope floor. for that i also need to define where is the slope by storing x, y of both ends of the slope.

In the image bellow, you see a 32x32 tile map, origin of each image is top left.

so regarding the awnser i should write this ?

and how i can detect the collision against collisionHeight ?

Finally when the collision will be detected should i use y=mx+b for playerY displacement ? 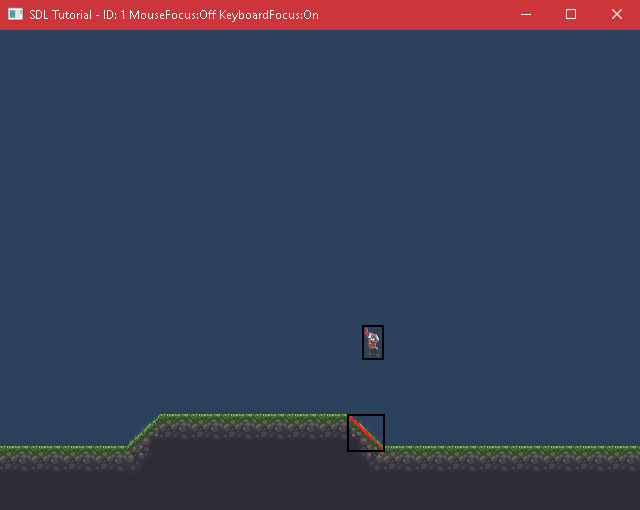 It looks like all you need to do is find how far your character's center is shifted left or right from your line's anchor point, then compute how much your line rises over that interval (or falls, if the product of x offset and slope is negative)

Well, to answer the letter of your question, a collision between a point and a line would require the point to literally be on the line, and due to floating-point rounding error, you will rarely ever see that in each frame by itself.

To detect a collision that has occurred, you would instead use a technique called sweeping to create a line segment from the point's location in its previous frame, to its coordinate in the current frame. The point of impact would then be trivial, as the intersection between two lines in 2D is simple. Here is an excerpt from Geometric Tools for Computer Graphics by Philip Schnieder and David Eberly (i've added some comments and changed some types for elaboration);

To answer the spirit of your question I would suggest instead of a point, think of your point a sphere with a very small radius. Now, still following the idea that you want to use a line segment to detect the collision between your point and segment without sweep testing, it becomes another trivial geometric problem. Simply find the distance from your point to the line segment, or better yet the squared distance, to avoid the square root entirely. Here's another excerpt;

Now to see if your small sphere is colliding, simply check if the squared distance is less than the squared radius of your circle.

From the picture you've provided, my gut tells me that a more robust solution would be to think of it as a triangle, rather than a line. Using slopes and such is all well and good, but in my experience, solid polygons tend to be more robust. I highly recommend checking out Randy Gaul's 2D player controller educational github, as he has much to say about this exact question.

If you'd like to see simple triangle point collision detection, I recommend reading Christer Erickson's Realtime Collision Detection as it's a font of knowledge on this subject.

Not the answer you're looking for? Browse other questions tagged 2d collision-detection linear-algebra or ask your own question.

9
How to detect collisions between sprite and a user generated shape of some sort?
1
2D collision and getting closer to objects
3
3D Ball Physics Theory: collision response on ground and against walls?
7
Sidescroller variable terrain heightmap for walking/collision
3
Collision detection with non-rectangular images
1
2D tile-based collisions: using different methods by tile?
3
2D collision resolution: works on each axis individually, but not with both combined