I am using Monogame to create a small Android game. I am trying to draw a sprite to the Android screen but it seems to have a padding of some pixels. The same game works fine on desktop.

How can I remove the padding? The graphic itself has no borders etc; the problem is also reproducible with any other sprite.

I have created a new project in VS2019 with the Monogame templates for VS2017 and tried to reproduce this behavior in a new project.

It seems that the problem has something to do with the notch of my emulator. In an emulator without a notch the problem seems to be non existent. I found this thread on the Monogame community but it hasn't got any answers.

My source code looks in its simplest form now as follows:

The result of this code is this: 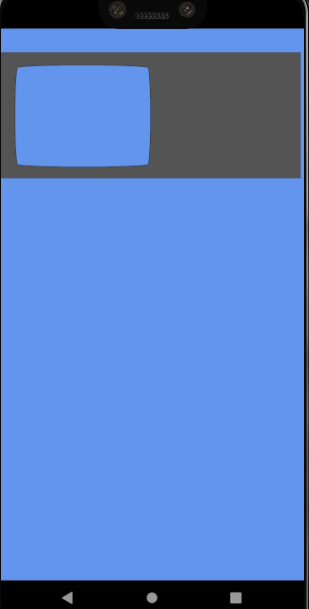 The Game is compiled for Android 8.1 and I use the Monogame framework 3.7.1.

After trying several things it seems that it is a problem with version 3.7.1 of Monogame. I switched to Version 3.6 and the padding is gone. I will update this answer/question if I find the reason why 3.6 behaves differently then 3.7.1

Not the answer you're looking for? Browse other questions tagged c# android monogame visual-studio or ask your own question.

3
Weird behavior with XNA SpriteBatch.Draw origin
2
XNA spritebatch.Draw: Which part gets colored by the color parameter?
1
Drawing sprites to a permanent Texture2d using Monogame / XNA
3
Is multipass rendering possible with SpriteBatch?
0
ArgumentNullException from SpriteBatch.Draw trying to get a Texture2D from a jagged array
1
Destroying a ship removes both the ship and the bullets it has fired
2
MonoGame - correct overloads for SpriteBatch.Draw flipping horizontally