How to cut a desired shape out of a mesh?

I want the player to be able to cut a hole through a wall, similar to what's shown in this video

I have done this for automated medical CAD procedures as well as game engines, and will attempt to provide adequate information in order for you to accomplish this task on your own, but I will not be able to provide the script for you as this is a non-trivial task that requires a good deal of computational geometry and problem-solving. What you're asking is quite complicated and it is for this reason you have not seen this mechanic in most games.

So on to the data structure and algorithm;

A popular data structure used in topological deformation and slicing procedures is called a Half-Edge Mesh, also known as a Doubly Connected Edge List. It's by no means the best graph for all scenarios, but it's a thoroughly tested structure that I've personally employed to accomplish similar tasks and can speak to its versatility. If this was your own engine and not unity, I would suggest moving your collider geometry implementation toward this as it supports non-triangulated surfaces and can be used to optimize certain collision detection algorithms. 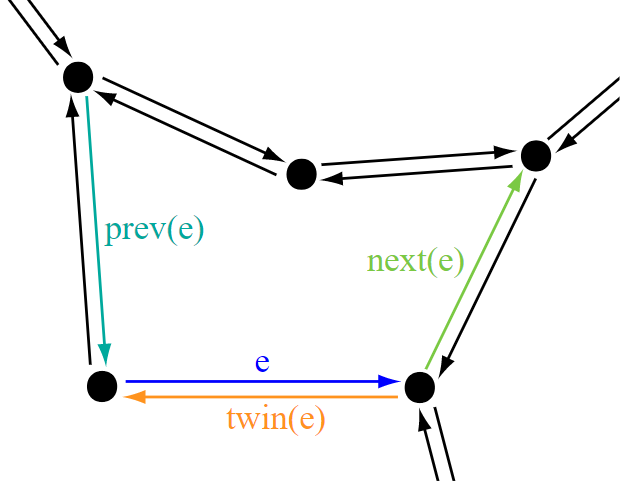 As a high-level overview, it's simply a directed graph made up by a doubly-linked list of vertices and edges with the caveat being each physical edge on the geometry is represented by two edges in the graph, known as twin edges. Each of these edges owns 1 vertex (usually represented by an index instead of the physical point), and has a pointer to the next edge, previous edge, and its twin-edge which traverses an adjacent face in the opposite direction. This is the big feature of half-edge graphs, allowing one to iterate an entire polygon face by simply walking the next pointer until you're back where you started. This is essential to the procedure, as it allows us to preserve the winding order of the vertices as they must always be uploaded to the GPU in the same way. Otherwise, you get a big gaping triangular hole wherever the winding order was flipped. I advise looking for existing implementations in Unity for this, as the helper functions you will need to write (such as inserting a vertex) will take a lot of white-board planning and diagramming to get right.

So now, assuming you've successfully converted your mesh into a half-edge data structure, you can now traverse the surface of the mesh and you're ready to try your hand at geodesic pathfinding. To begin, you would use raycasts or some other method involving your mechanic to somehow pull topological information such as which face of the geometry was hit, in order to find a starting point. If you plan on drawing, I suggest saving these points and converting them into a Catmull-Rom splines because if your user is raycasting each frame, you will need to have a path to follow and splines are a simple way of providing "infinite" precision (because it is an implicit curve), instead of limiting yourself to wherever the user happened to be pointing that frame.

Begin by inserting a point into the geometry at the first spot your user hit. You will need to have some sort of triangulation utility handy, iterative algorithms like Bowyer-Watson or the Earcut Algorithm. This is where the problem-solving actually starts, as you will need to get your hands dirty to implement a rag-tag Constrained Delaunay Triangulation (referred to as CDT) or just a simple constrained triangulation (which there isn't much information on, as almost everyone needs Delaunay triangles, though we do not) which is quite literally a field of study in and of itself. You'll notice in the illustrations provided by Wikipedia on the Bowyer-Watson algorithm that at each iterative insertion, the order in which they are added tend to be preserved via an edge connecting each new vertex at each step. Another hint I can give you from the result of my own experimentation, is that if you look at any convex non-triangulated half-edge diagram, they can be instantly triangulated by connecting from the "head" of an edge, to the tail of the previous edge. i.e.

Take that for what you will and roll with it cause it only gets worse from here.

Now you have inserted and triangulated your face, next comes traversing the graph. I suggest precalculating the inward-facing normal of each edge, essentially if you were to rotate each edge's direction 90 degrees to face the center of the triangle, that's the direction you want. Treat that like a half-plane like I mentioned earlier with the sutherland-hodgeman clipping algorithm. You want to continue inserting and triangulating occasionally until the point drawn by your player crosses the edge of a triangle, at which point the sign of the dot product will switch from positive to negative as the dot product with a plane represents the signed-distance of the point from that plane. Split that triangle at the clipped point, inserting it into your graph, and continue on to the next triangle.

Now while all that's going on, if you're in 3D you need your trusty helper functions to be silently creating "internal" edges (literally meant for the inside of the polyhedra, as we are treating it like a solid object which suddenly gains a new internal surface) each time you add your new half-edge pairs to the graph, and make sure they connect with one another, as you will eventually need to triangulate that surface when the procedure is complete.

That about covers it as far as down-and-dirty geodesic pathfinding goes, the rest of the procedure boils down to your mechanics and how you wish to start and stop the process. Ideally, the ends should connect (the spline simplifies this) so that you can easily create your new shapes without thinking much about it. That only leaves conversion back to renderable geometry, which I will leave up to you.

Aside from this, you may want to consider a high-density voxel object approach, which I have no experience with, but have seen it employed for destructible environments using marching cubes or dual contours to smooth the mesh and make it appear like you're not using voxels (as seen in games such as No-Man's Sky).

My point here is that it is possible, but you have to really want it and be willing to put in an enormous amount of time and research. I'll leave you with a few other pertinent white papers and final words of wisdom to mull over.

i dont think there is anyone that can tell you how this exactly works. there should be lots of elements to make this happen but i can give some guessing.

1) if you look for cutting for that is in metal gear rising the sward works like a plane equation with borders. you can make a calculation for vertices Up and Down of that plane. then do a capping algorithm to cover cut. but certainly lots of other things should be handled to make it work properly.

2) it seems in your example, there is a plane with a fence texture over it. maybe on shooting the lazer gun, it raycasts and only removes the nearest polygun and after that a calculation that seperated polygons did make a whole new model, so just adding something like rigidbody and make it fall.

3) in image processing there are region detection algorithms. maybe another binary image is calculated in hidden mode that whole page is white and when lazer is being shot to it, pixels turn to black. so after that close region can be calculated.

remember what is say is based on guessing and there is much distance from implementation.

2
How do I implement real-time mesh deformation, with regards to environmental damage?
1
In Unity, how can I modify the shape of a sprite?
4
color individual triangles on a mesh in Unity?
1
How to create OpenGL models like the ones created by blender's wireframe modifier?
1
How can one replicate the 'Quake Disruptor' of Wipeout XL/2097?
0
Unity LWRP Sprite Renderer Sorting incorrectly after upgrading
0
filter camera output by mesh