I followed the official step-by-step "Visual Studio Code and Unity" guide, but it seems I messed up something, because Intellisense doesn't see any Unity related stuff.

On a newly created project, opening a C# script via double clicking it won't correctly load VSCode's extensions. (this is due to parts of the sln file not being generated.)

Create at least one C# script, then go to 'Assets' > 'Open C# Project' will generate the correct sln file and after a quick reload of VSCode, intellisense starts working.

After doing this one time, intellisense will continue to work as expected, double clicking C# scripts etc.

Well, the source of this issue changes from issue to issue. So if this doesn't solve your issue, be sure to read further down below.

In my case it was due to changing the default install path for new applications.

I changed the default install path to my HDD, so I don't have to manually change every new application's install path from my SSD to my HDD.

The problem is that some applications only looks at the drive on which Windows is installed.

So now I change my default install path to my SSD every time I update Unity, so Visual Studio will be installed at the path where VS Code will look for the dlls.

But sometimes this won't be enough, for example this time I wasted some time again, and still haven't figured out the correct way of doing this. Maybe I will just give in, and always manually change the install path. What I did:

I had the same problem when I started using unity and visual studio. Here's how I got around it: to open a c# file from unity, what most people do is double click on the script. the problem with this for me, was that it only opened the file, not the c# project. So, make sure you've opened the c# file by double clicking before, and then, in visual studios, click File-Open Project/Solution and then navigate to the folder you've saved your unity project in. In that folder, there should be a C# project file.(if there isn't, just double click on the script in unity, close the script, and try to open the project file again.) open it, and voila! If your having the same problem i was, intellisense should be working with unity!

I hope this was helpful.

It's not a new issue. I just faced such a problem and mostly that's because Unity and VS or other IDEs are not synced. Sometimes even going to Preferences and setting the chosen IDE even doesn't work. C# classes are known as miscellaneous and auto-complete can't find the right choices.

Sometimes it's because you use a cracked version of VS or Unity or just downloaded them from an unofficial source.

Most of the time I choose the last solution first. Just remove both VS and Unity and download them from their official website. From the time I used official versions I just don't face such problems. 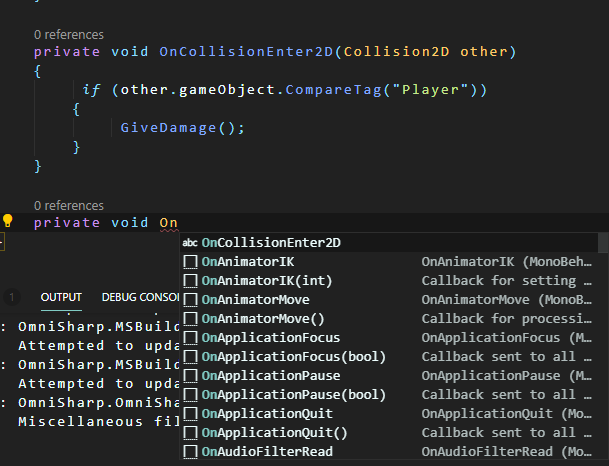 Hope this helps you.

6
How to enable Unity related syntax highlighting with VSCode?
1
Unity solution not compatible with Visual Studio
1
Unity launches both Visual Studio and Monodevelop simultaneously
3
Synchronization problem with Visual Studio 2017 and Unity 2017.1.1f
7
No project in visual studio using unity created
5
How can I launch Visual Studio via a double-click on a C# script in Unity?
0
VS2017 (and 2019) Community Intellisense only showing part of the Unity class/method information, missing descriptions
0
How do I step into my code when automatic Pause mode in Unity occurs?
0
Unity3D: My Admob Setting window isn't showing properly
0
Unity with VS Code: .sln generated is missing assemblies. Only .sln generated by Studio works (with Code as well)