Currently I have 2 cameras, one for viewing the 3D objects (Perspective), and the other camera to view 2D objects (Orthographic).
(Also, the view of the camera never intercepts each other.)

I am trying to display a 2D object based on the position of a 3D object, like so:

What I have is the respective 2D and 3D Camera, as well as the Vector3 position of the 3D GameObject.

The only problem is that the returned position is not completely aligned with the 3D position.
Which results in this kind of results: 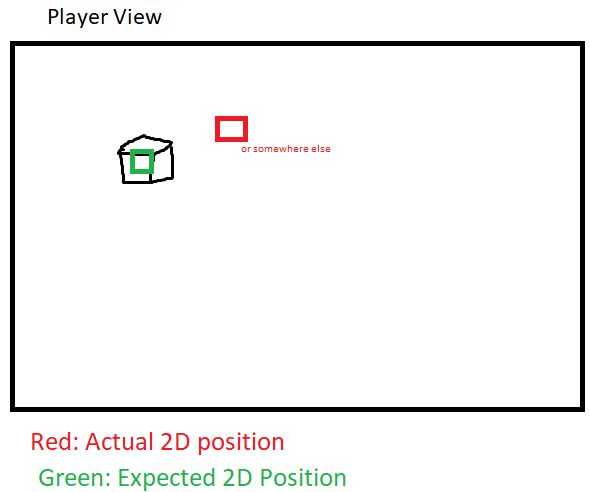 Also, I have made sure that both the 3D and 2D object have their pivot point are set correctly in the center, but it still does not work as intended.

First use the WorldToScreenPoint method of the 3d camera to convert the position of the 3d object to screen coordinates:

Then use the corresponding method ScreenToWorldPoint of the 2d camera to find the point in the 2d world that corresponds to this screen position:

When you still experience an offset, keep in mind that the transform.position of a gameObject does not necessarily correspond to what looks like the center of its visual representation. There are several circumstances which can lead to an object appearing at a different location than its transform. So if you still encounter problems like that, try reproducing them with simple primitives first to ensure that it's not a problem like misaligned 3d models, sprite pivots, child-objects with local position, etc.

Oh yeah, and call the function on your 2D camera :D

19
Why use matrix transform for 2D camera scrolling?
1
Angled topdown perspective camera for 2.5d game
2
Getting player cube to move left or right in relation to camera based on camera's rotation
1
Move an object to a point relative to the second camera
3
How to completely stop the camera from clipping into the ground
0
Keeping 2 objects within cameras view
0
Unity - Top Down Perspective Camera to Orthographic size
0
How to move a player (with camera) towards a target object until camera fill target object?