I have setup a scene with one GameObject that has CharacterController component (Player) and another one Cube that represents Table with RigidBody and BoxCollider components.

Now, when I get close to this table I can press E and grab the table. Now I can pull or push table. What I do is when I press E key on keyboard I just attach this "table" to the Player gameobject with table.transform.SetParent(player.transform); Everything works great except when I add second cube that should prevent table to be moved any further. 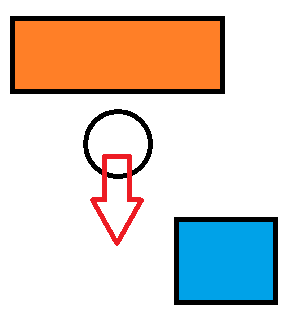 As you can see, if I pull table in the direction of the arrow at some point, table will collide with blue cube. However, if I keep pressing S (for backward movement), player will continue to move, but table will not be moving (because I froze rotation on table's rigidbody component intentionally). What I want is to prevent player movement if the object that is currently being pushed or pulled cannot move any further...

Any ideas how to accomplish this?

This is what I came up with. I calculate original distance at the time of parenting table to Player object, then I keep track if that distance changed...

Problem:
As it seems, your player as well as your table have each a rigidbody.
That means, that even though the table is part of player, it can move in local space, thus allow the player to move independendly.

Solution:
You can fix that relatively easy by removing the rigidbody from the table as soon as the player takes a hold of it.
Then the physics engine will recognize the table to be a part of the player's collider, thus any table collision will be in fact a player collision.

Note:
It's recommended not to move a rigidbody via transform.position = [...].
Instead use rigidbody.position to change the position.
See the API for more information.

Not the answer you're looking for? Browse other questions tagged unity character rigidbody or ask your own question.

0
Jump Issue(Unity3D)
0
(Unity) Physics based movement vs Straight position change
0
Unity3D - Change player input axes on trigger
1
Limiting interaction between certain RigidBodies
0
Unity player movement, rotation breaks the movement
1
Problems applying movement to a RigidBody in Unity
1
How to completely stop the camera from clipping into the ground
0
Math question: How to move/extrude a cube's face in Unity?