How to handle grid snapping when the object is greater than the grid cell width and height?

I want to be able to move objects on a grid always by what the grid cell size is, and objects bigger than the grid size should not overlap.

If I then change the size of the object, it doesn't snap to the grid quite how I would like. It snaps, but overlaps. I don't want an object to overlap the grid cell.

The snapping code is pretty straight forward and has been posted quite a lot and seems to work fine.

I was thinking that I need to somehow set a pivot / anchor point, but I wouldn't want that to be one corner of the object, I was thinking somehow I could find the center of the object and work from there so it can snap correctly. Not sure if this is correct, or how to work that out.

Edit: More code added to show how I am moving objects around currently.

Objects are placed in the world by ray casting. I don't use any grid array to know the location of objects on the grid.

For placement testing (i.e object inside another) this is handled already but removed that part of the code. For that I am doing a simple box overlap test which works nicely.

Although the existing answer looks pretty good. Considering your existing code, and the fact that you mentioned that you already handled placement testing. I think there is another answer that is much closer to your existing code and requires less changes.

Another way around the problem is to substract the pivot before snapping and then add it back on after snapping. As an example:

This example is only about the x axis for simplicity.

Which is exactly the result we want to get both cubes aligned on the same grid and still center correctly on the cursor position, to convert that to the code you are using, would end up something like this:

Note that this code might shift your entire grid by +0.5 on all axes, but I don't think that should be to big of a problem to fix.

As you noticed, the above code doesn't work when you rotate the object. This is because when we calculated our pivot, we ignore the rotation. So we could apply the rotation to the pivot to fix that.

In the below example I do that. There might be a single line builtin method to do this, not sure. If there is I haven't found it yet...

To use this just replace the original line where you declare localObjScale with this snippet.

The problem is, that you seem to take the center of the shape as pivot.
What you want is to select a pivot, that places the shape inside the grid, so that it overlaps as few cells as possible.

How to obtain such a pivot: 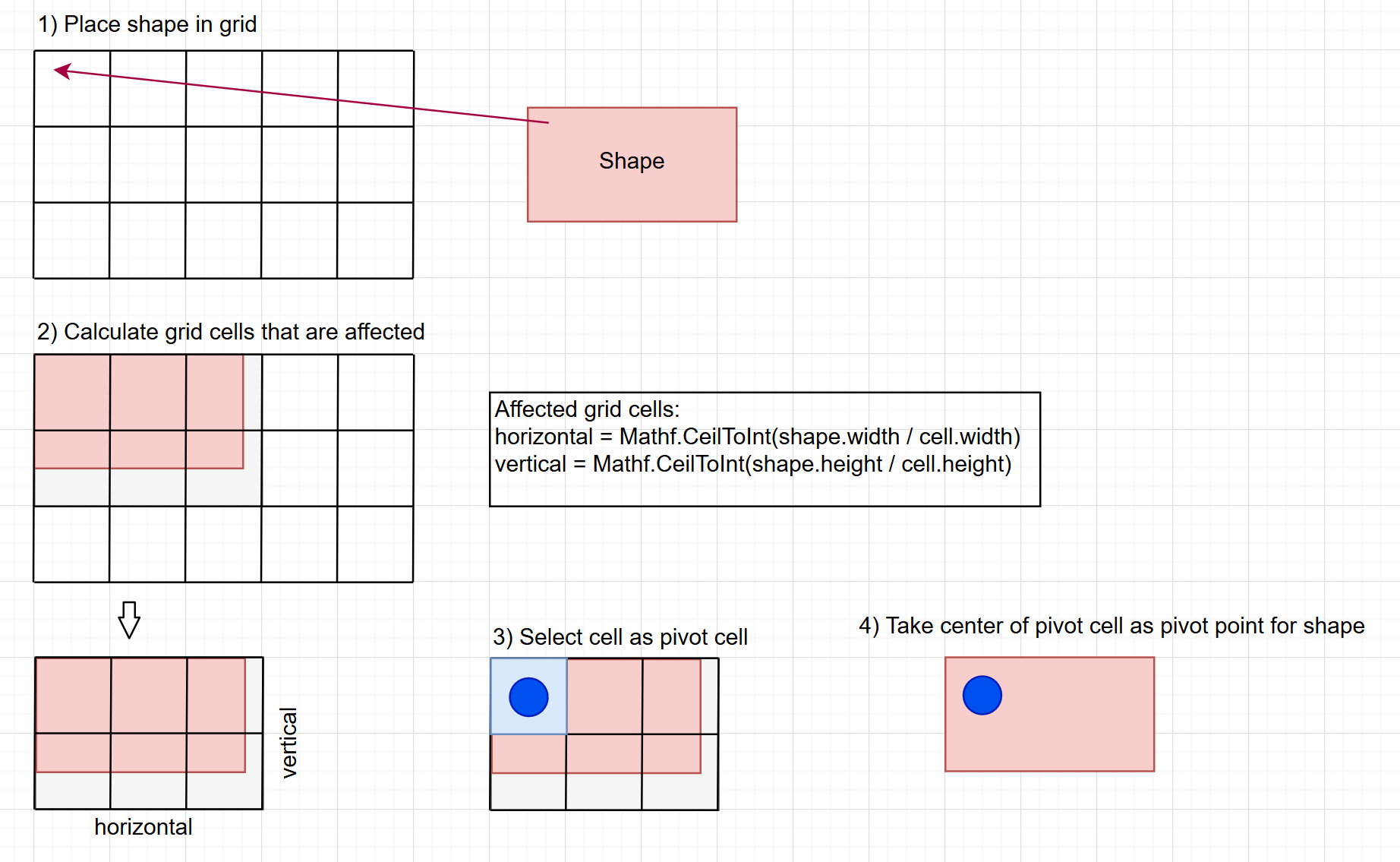 When you use this pivot to place your shapes, they will not overlap to much anymore.
At the same time, you can use the calculated grid space for the shape, to determine whether a cell is being occupied or not by a shape.

Keep in mind, the visualized grid is only as a to help understanding the concept.
In generall, you just need the width and length of your shape and the size of each cell.
Then you can calculate the amount of affected cells by dividing as shown in the image.
Also if you want to always use the top left cell as pivot cell, you can skip that step as well.

Not the answer you're looking for? Browse other questions tagged unity grid .

12
How can I snap a game object's position to a grid?
0
Can the GUI be used to create game objects?
0
Is there such thing as a hybrid View that combines SurfaceView and GridView in Android?
1
Why does Unity not detect my camera attached via the inspector?
2
How do I handle objects with a width and height in grid-based pathfinding?
1
Unity C#: Using Linecast with collider bounds
8
Snapping shapes together in game
0
Collision with supposedly aligned box-colliders
1
Unity2D Grid-based Sprite Movement and Tilemap Collision