How can I move and rotate an object along with another using vector math?

How can I move and rotate an object along with another using vector math? 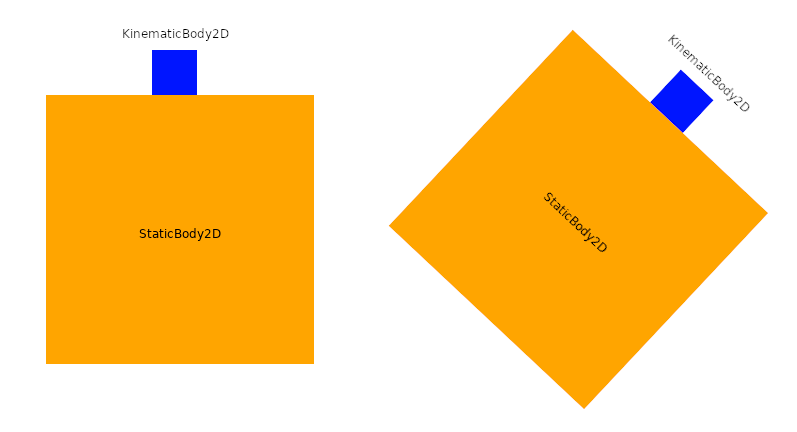 The engine is geared towards making this easy by parenting. Though it may not be conceptually correct in your case, it's the most godot friendly way of doing it. Just add the ship as a child node of the planet when it lands, and detach it from the planet when it leaves.

As long as the parent-child relation is a chain of spatial nodes (if 3D) or Node2d (if 2D) they will share and propagate transforms.

If for a reason you want a node to be a child of a Spatial or Node2d without inheriting their movement, you just have to make sure that the "independent" node is child of a bare "Node" (the gray/white ones in the UI, instead of the blue/red). This would interrupt the transform propagation

Disclaimer: This solution assumes knowledge of linear algebra. Additionally, I'm new to these problems myself and my solution might be erroneous or incomplete. Any comments or edits are more than welcome.

Any transformation of objects in 2(3)D space is done via what is called an affine transformation matrix. This matrix is usually a 3x3 (or 4x4 in 3D) matrix that contains/combines the following transformations:

All of the transformations are applied to each of the points that make up the object(s) in space. Affine transformations have a specific property where whichever set of points they transform, their relative positions remain unchanged.

In order to perform a transformation on an object you must first generate the corresponding matrix that will do this (in your picture example this would be a matrix containing only a rotation around the Z axis located in the middle of the orange square). With the matrix at hand, you can now apply it to each point that represents your objects in space (both the orange and the blue squares). In order to apply a transformation matrix you multiply it with the vector that represents the position of the point (in 3D the vector has 3 components namely x,y and z), \$M*V\$ where \$M\$ is a 4x4 transformation matrix and \$V=[x,y,z]^T\$ (the \$T\$ exponent denotes the transpose of the matrix). Applying this transformation to all the points in space will rotate them but their relative positions will remain unchanged (as per the affine transformation property) which means that the blue square position relative to the orange square will not change.

Oxy is correct that parenting is the easy way. And, yes, I'm aware I'm answering years later. Yet, if that is not convinient, we can still do this.

We are looking for a relative_transform, such that:

Once you have that, you can rotate the planet… Consider using a KinematicBody2D for the planet… Anyway, for example:

This also gives you the option to not set planet.global_transform, so we would be doing this as if it rotated. You would probably want to keep track of the rotation elsewhere in that case.

And then we can computed the updated transform for the ship: