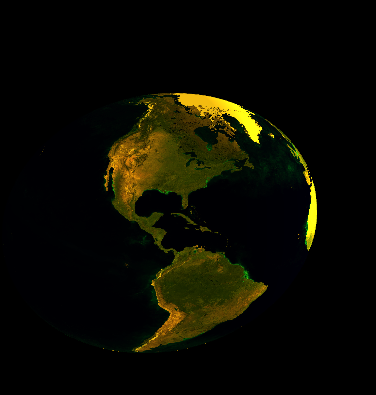 The image above is a static capture of a dynamic OpenGL project I created in which I wrapped a NASA albedo, i.e., sans clouds, image on an OpenGL generated sphere. In so doing, I also generated the UV coordinates associated with each vertex position.

This was an incremental learning effort in which I had already applied model matrix corrections to the vertex positions for the rotating and translating (orbiting) "Earth".

I was surprised to find that I did not have to apply a model matrix correction to the UV coordinates.

I have tentatively concluded that once the jpg image coordinates are associated with the corresponding vertex positions with the UV coordinates in the range of [0, 1], they are fixed and need no further correction.

Does that sound correct, or is there more to the situation?

That is correct: the texture coordinates for a model don’t need to change as you move that model around a scene or manipulate it. They are mapping parts of the geometry surface to parts of an image and thus stay fixed.

You may need to update texture coordinates if you want to do some kind of animation of the texture across a surface (although there are still other ways to do that) or similar more complex effect. But in general, you don't.

Not the answer you're looking for? Browse other questions tagged opengl uv-mapping or ask your own question.

6
exporting bind and keyframe bone poses from blender to use in OpenGL
1
Skeletal Animation with UV seams
25
Which is the best LOD method for planet rendering?
4
How do I reuse the same vertex data, but with different colors, for my sphere objects?
4
Translating an object in the rotation direction
0
Finding texture coordinates for plane