Pass data down to components

In the game I have, I'm using an architecture close to what I've seen of Unity components :

Basically, the universe implements the game loop, entities implement and update method, which always delegates to each entity's components.

Components are where the actual data and behaviors sit, quite like a MonoBehavior in Unity I guess.

And I use this architecture to model my whole game.

I use child classes of Entity as prefabs:

So, I get this kind of Universe - Entity - Component tree : 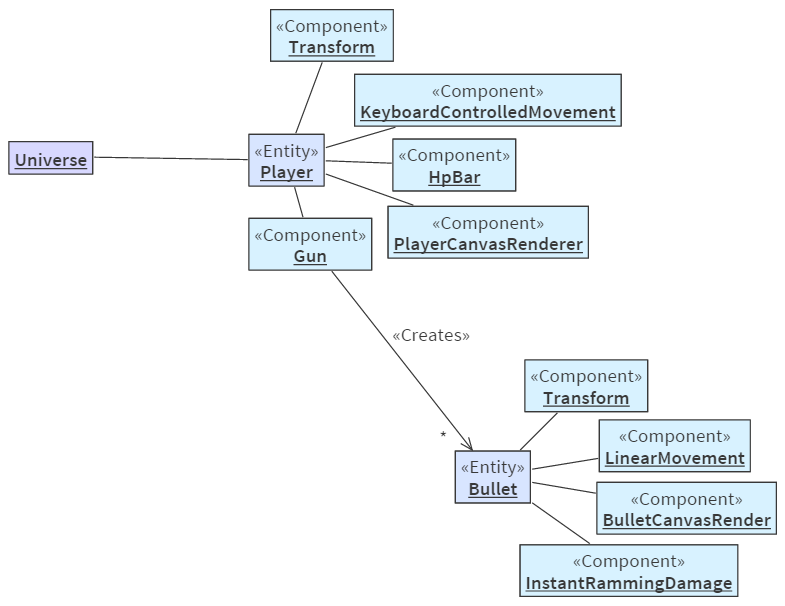 Aside from the entities and the components, there exist Settings, such as ell the key bindings, the reference to the output canvas, the player buffs, ...

They all have to reach various components, and I don't know how to get them there. 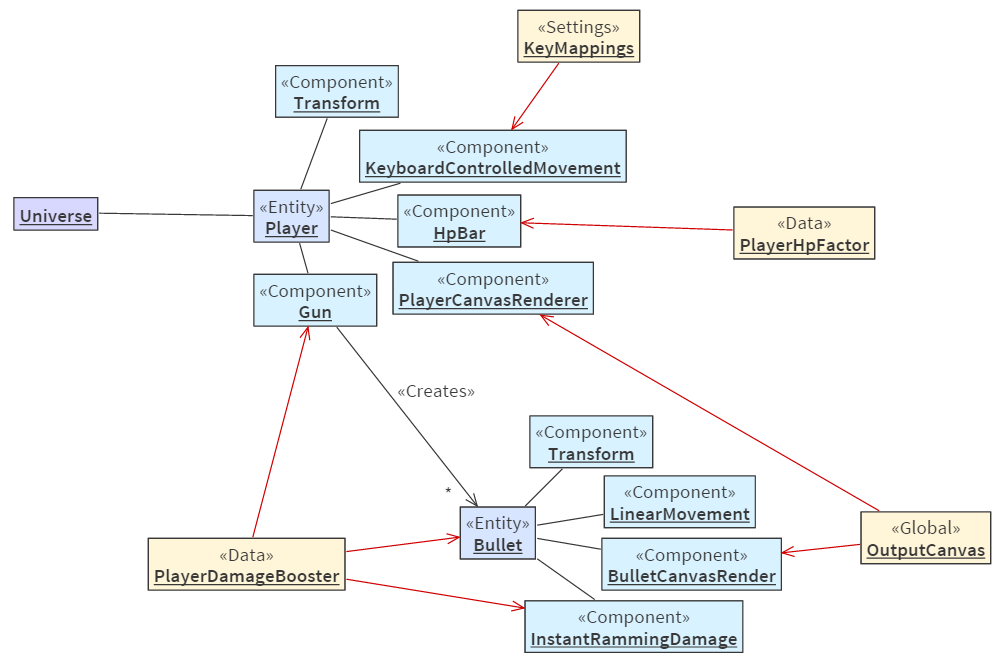 Will you have networking?

I understand that you are probably making a single player game engine. However, thinking about how to deal with the network very, very, very early in the desgin will push you a better architecture... even if your game will not be networked anyway.

Think of a server-client architecture. If you were to build that, you would want to be able to send information about the enetities from the server to the client. To do this, it is convinient that components have value semantics. And for that, it is conveninient that they do not have behaviour and do not depend on external systems (eg. canvas).

The server would have systems that handle the behaviour, and the client would deal with IO (keybindings, rendering, etc...), but they need to work on the same data.

Thus, you implement a "real ECS architecture" plus client-server synchronization of components and you are good to go (well, netcode gets more complicated than that, but that is a great start).

To answer you question: All of the above.

Let us pretend we do not want to use systems.

Currently, you would have entities that has Transform, which I am guessing defines thier position. I suppose you would want to add colliders for physics. So, let us pretend you have those too...

Your physics simulation would update the transforms. No problem there. However, you also want to check for collisions. Hmm...

Somehow, you need the physics component to get a list of nearby objects to check collisions against. How?

Besides, that physics component would run per entity. If no information is shared among them, one entity A would find it collides with another entity B, and then entity B finds it collides with entity A. You find the collision twice.

Thus, you need to break encapsulation of the components. They need to know where each other is, and who collided with who. That is not a good design.

Let us pretend we do want to use systems.

Two ways to do this:

Then, the physics system can find candidate collision pairs, check for collisions, and do resolution,

Pretending there are no systems

Let us say we want to be able to move some objects with user input, or we want them to move in a predefined path, or be handled by AI (path finding et.al.).

However, the physics component wants to handle movement too. That means that these components need to know of each other, and thus would be coupled.

To solve it, you a component for the position, and now the other components only need to know about that one.

Make it a system

A system takes the bindings from configuration files, or whatever. There is an input system that needs them. You can choose if you want it to post to a blackboard or you want to pass them directly.

Either way, the input manager system takes external input. It will query for the entities with the control components. Yes, more than one. That way you can handle couch multiplayer.

Now you have a few options:

I'm sure there are more ways to do this, these are just the ones that I have come up with.

Why entities as just an id

We can implement entities as dictionaries of components. And it works. In fact, somewhere in the ECS there is something equivalent to a dictionary of components per entity.

However, you want to do much more than store components in entities.

Unless you are ok with each system iterating linearly over all the entities, then those queries means that you want to create some sort of indexes of entities. And you want to make sure that updating the dictionary of components updates the indexes. That means that the dictionay of components cannot be a plain old dictionary, it is a façade to update the internals of the ECS.

Alright, what else does the entity has? Nothing, really. The behaviour should be in the systems, and all the data in the components. If you really want to have multiple kinds of entities, you can add a Tag component. Thus, you do not want entity to be a base class (client code could extend it and use it improperly). Also, composition over inheritance.

The design of the "registry" (by any other name) is that of data tables. You can think of the id as the primary key, have a column for each component type and a row for each entity. There are, of course, other optimizations form that idea.

185
What is the role of "systems" in a component-based entity architecture?
17
Why is it a bad idea to store methods in Entities and Components? (Along with some other Entity System questions.)
4
Getting Started with Component Architecture: DI?
2
Executing Components in an Entity Component System
1
Proper way to encapsulate components?
0
ECS: performance of many systems cycling on entities
3
Adding new components and systems in my ECS requires lots of boilerplate code
2
ECS - Components inside components?
0
How to: Duplicating and updating component data in systems