Unity3d: Position a gameobject such that its forms a right angled triangle with other two gameobjects 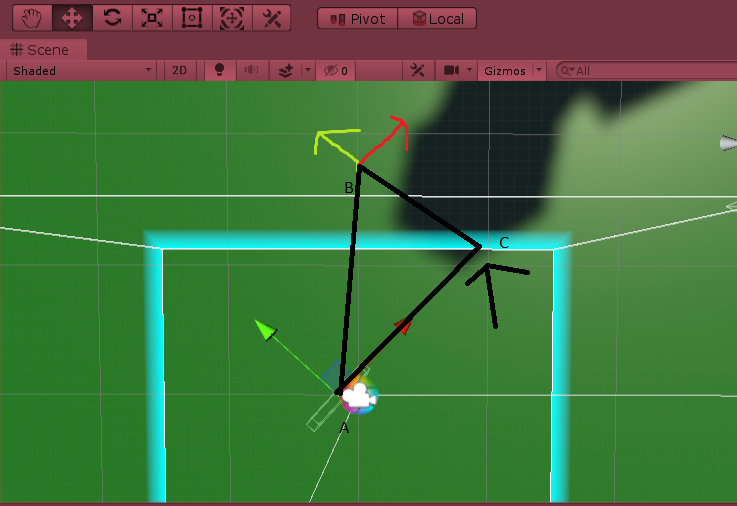 How do I position C gameObject such that it forms a right angled triangle with A and B. I tried to use (B.transform.position.x,A.transform.position.z) but it still gives me something which is close to A (it takes it globally). I want the C to be along the local red axis of A and local green axis of B as seen in the picture. What do I do?

We can solve this relatively easily using A's transformation:

This is guaranteed to be along A's x-axis (the red axis), since its y & z position in A's local space are both zero.

It's guaranteed to form a right-angled triangle with A & B because it forms a right triangle in A's local space (its separation from A is purely along the x-axis, and its separation from B has an x component of zero), and Unity transforms don't include shear.

Not the answer you're looking for? Browse other questions tagged unity mathematics transformation angles direction or ask your own question.

1
How to get a point to the left/right of a vector
1
Issue with multiplayer interpolation
1
Should I store local forward/right/up vector or calculate when necessary?
1
Inverse Kinematics using Pseudoinverse Jacobian
0
Unity Rotate Object Around Local X Axis , then Local Y Axis, then Local Z Axis (like a turtle)
1
Why is there a discrepancy between these two transform.up vectors?
0
Can't set object's local rotation like rotating from gizmo in the scene
0
How to select top most gameObject in a stack of gameObjects?
1
Scaling a rotated child with parent-child transforms