Hi have created some buttons from sprite and I added image and button components on it. 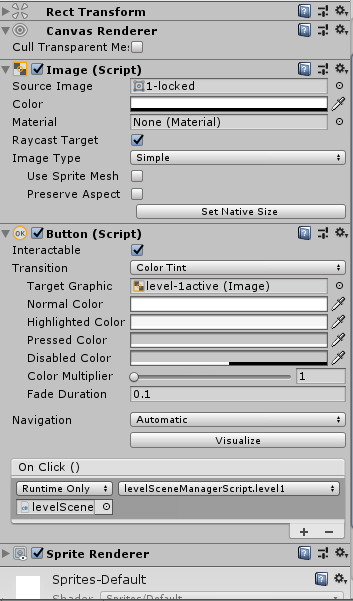 I am just using sprites because In my game the camera can be moved on x and y. But I don't want my button to move and since UI buttons move with camera that is why I am not using them.

Here is the GIF to explain the scene:

It looks like you tried to attach a SpriteRenderer to your button to render its visual in your game scene rather than as part of the UI. This means that where the player sees the button, and where Unity thinks the clickable UI is, have no relationship to one another.

If you click the SpriteRenderer, that is not part of the UI system, it is not the same as clicking on the UI button.

To detect a click on a Sprite, add a Collider to it, and use a script to listen for clicks:

Note that the presence of this method forces Unity to fire a ray into your scene every frame to track mouse interaction with colliders in your scene, so it does have a performance cost.

Or, you can click the button itself, by getting rid of your SpriteRenderer and instead using a World Space Canvas to draw your actual UI button where you want it in the scene. Then you have all the power of the normal UI system, and the freedom to position it anywhere in your world that you want it to go.

Not the answer you're looking for? Browse other questions tagged unity c# 2d sprites or ask your own question.

2
how to accurately select a sprite on a scene with a click?
1
Unity tiles with wierd border flickering when moving horizontal 2D
1
Unity 5 Dynamic Button Creation with Event Parameters
0
On button click wait
0
Event Trigger for sprite not working
0
few button image are not updating
0
Unity not redrawing sprite, after sprite change
1
Select a button without calling click
0
SpriteRenderer not Rendering Sprite