How to know if two surface are in the same direction?

In my code I creat a Mesh that are composed by multiple tile. those tile can have edge that are shared, and I need to know if the normal of the tile that have shared edge have the same direction, because I calculat the normal of the edge to smooth the light. before I used the Vector.Dot() , but I've sometimes two tile that have a curve that make impossible to use this function as you can see in the 4th image. and the only information that i have in the calcul is the 2 normal of the tile. 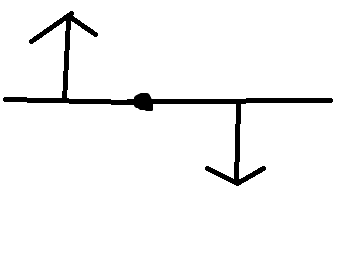 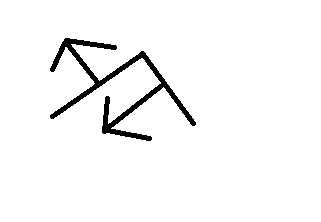 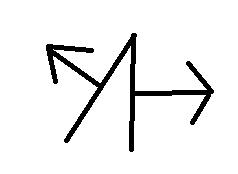 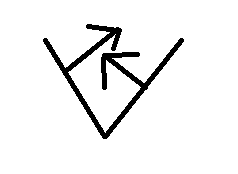 Imagine applying a force along those normals to the faces. If the normals both face in the same direction (e.g. outward), then it would have a book closing effect, the faces would get closer. If they faced in different directions, it would just rotate the whole thing.

To make this a little easier to implement, you need to make it more abstract. The concept I described above is torque. Torque relies on the force (normal vector here) and the leverage (the vector from the shared edge to the center of the face here). We don't actually need to calculate torque here, but we can guess the relationship of the two normals based on these two (leverage and normal vector). Let's see an example: 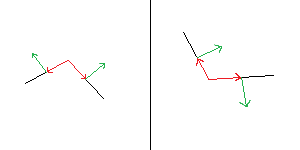 The green vectors are the normals, the red is the leverage. You don't actually need the "leverage" vector to be correct, it just need to be perpendicular to the normal vector and pointing in the same direction. I'll go over this when applying it to 3d.

So in short, to find out whether the faces look in the same direction, you need to find the signed angle between the red and green vectors, and if they have opposite signs, they do face the same way, otherwise they don't.

1.) Pick any of the points of the shared edge (marked in orange here): 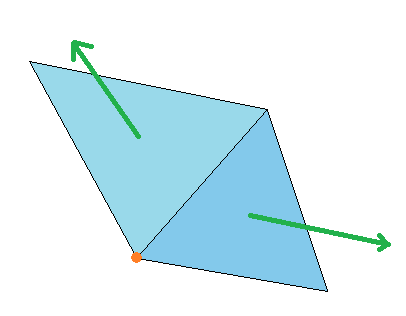 2.) Subtract the vector pointing to this position from the vectors pointing to a point that isn't part of the shared edge on each triangle to get two vectors (marked in red here): 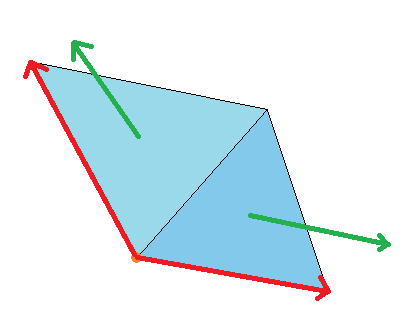 Now use cross product on these two vectors to get the vector that's perpendicular to both (the order of the two vectors doesn't matter, just keep it consistent for the rest of the steps). The vector is marked with purple: 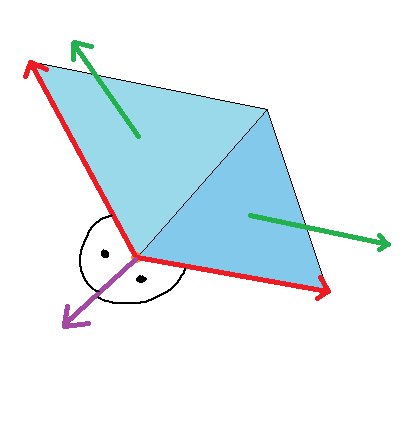 Based on the answer here, the signed angle as seen from the purple vector is

Get the signed angle from both pairs and if their signs are opposite (one of them is negative, the other is positive), then they face the same direction.

Not the answer you're looking for? Browse other questions tagged geometry 3d-meshes normals or ask your own question.