So, I have a procedurally generated planet. In my case it's 3D (hexagon/pentagon globe) but for simplicity let's assume it is a 2D grid.

I have distributed resources over this planet, using Simplex Noise, with a cut-off value, giving me a binary distribution.

One of the things I generate in this way, are fields of wheat, shown in yellow below. 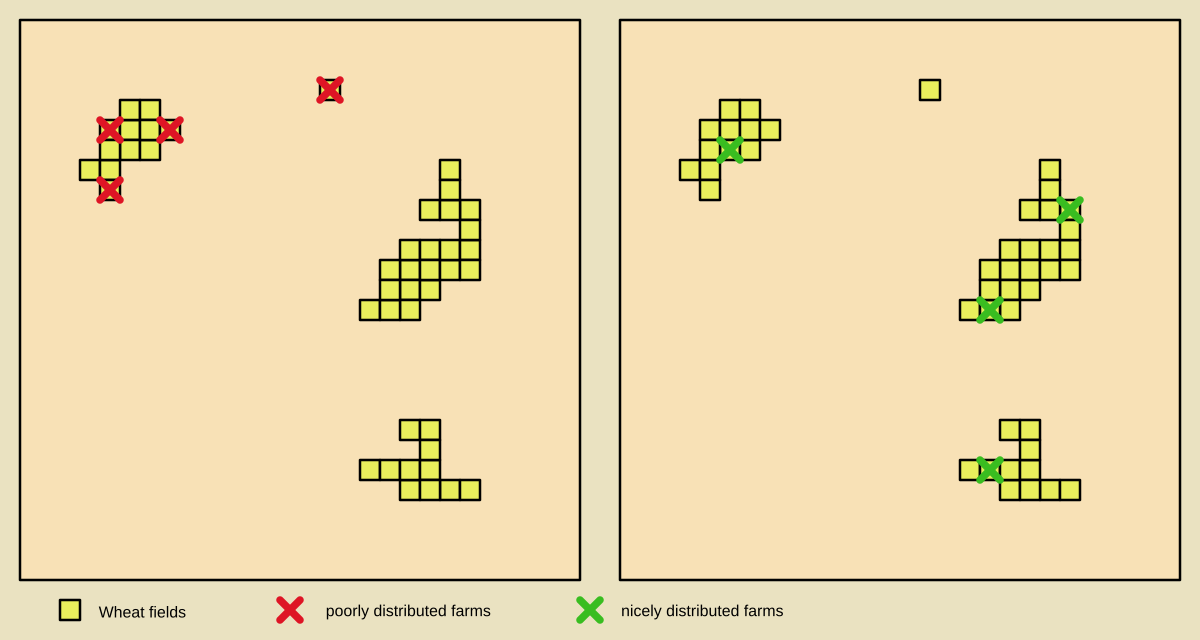 After the wheat-fields are generated, I want to procedurally place farms on the planet.

If I would just randomly pick a "yellow tile" (tile with wheat on it) then I run the danger of having them poorly distributed, as shown on the left.

What I want, is a nice distribution where farms favour large wheat areas that are still unoccupied by other farms, as shown on the right.

Is there a simple algorithm that can do this placement?

NOTE: I want to use this approach for other buildings like mines, quarries, lumberjack operations, etc. So I want to avoid placing first, and then growing resources around it. I want the noise field to drive the placement, not the other way around.

NOTE: Farms will not consume the wheat. I've made wheat fields binary wheat/no-wheat but also have scaled distributions with "potency" for e.g. forests, where the number of trees per tile can vary.

Thanks to the insight from @Peethor about computing the number of grain tiles per farm, I managed to solve it with a simple yet very effective approach:

Let G be the number of grain-tiles.

Let F be the number of farms.

Not the answer you're looking for? Browse other questions tagged procedural-generation grid noise .

3
Manipulating Perlin noise output to create different ore veins in different depths
21
How can I generate random maps that feel like Age of Empires II random maps?
1
GLSL: Noise via texture
2
Simplex noise heightmap
3
Unwanted Perlin Noise result
4
How to layer the Worley noise like this?
5
How to make noise-generated terrain more square?
1
Calculating distance in procedurally generated mesh LOD system
0
How can I increase the amount of peaks in Perlin noise without decreasing sampling frequency?