How to render a trimmed sprite?

I'm not sure how to do the untrimming. What do you do with the trim information?

My sprite is rendered as a quad with 4 vertices and 4 uv's.

Let's say the original sprite was:

Let's say that it exists in the atlas at:

To draw this untrimmed image, I do the following.

And this works fine. I can see an untrimmed image exactly as you would expect.

Let's say the original sprite was:

Let's say that it was trimmed in the atlas too:

So now the final location in the atlas is:

What I'm confused about is how to "untrim" the image when it is drawn. I tried:

I clearly am missing the concept here. How does one "untrim" the sprite during a render? (I'm using OpenGL) Am I supposed to move around the vertices, but not the bounding box?

What you have to do is roughly the following: 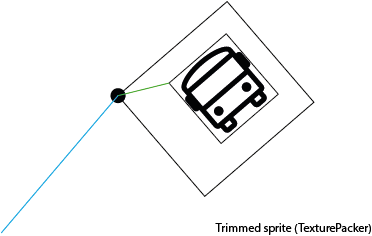 This image shows you the trimmed sprite inside the virtual "full" sprite. The trim offset is shown as a green line from the sprite's origin (black circle). The blue line stands for the sprite's transform (calculated from translation, scale and rotation).

Another option for you would be to use the Polygon Trim Mode. The difference here is that you get a list of triangles instead of a quad with the original coordinates in the source sprite.

Not the answer you're looking for? Browse other questions tagged opengl sprites spritesheet spritebatch texture-atlas or ask your own question.

3
How to convert pixel coordinates to GL coordinates in 2D space?
14
How can I handle sprite sheets with nonuniform sprite dimensions?
2
Box2d and sprites
7
Optimal OpenGL 2D Sprite Batching (Best Practice)
10
Sprite sheet textures picking up edges of adjacent texture
1
How to prevent a sprite to move in an angle that will lead to collision
2
how to accurately select a sprite on a scene with a click?
1
Removing/Updating Spritebatch
0
How to make my SpriteSheet be POT?
0
Multiple image objects extracted from spritesheets or one-two object for all?