this may be another beginner question. I have a simple data holding script and want to pass one variable from it as parameter to a function. But in the editor it only shows me the script name, not the option of any variable. What attribute or change do I need to make to make the variable visible for selection? (Passing the whole object works, but I don't like the parsing of the object inside the called method and would just to pass the parameter directly) Picture for easier understanding. 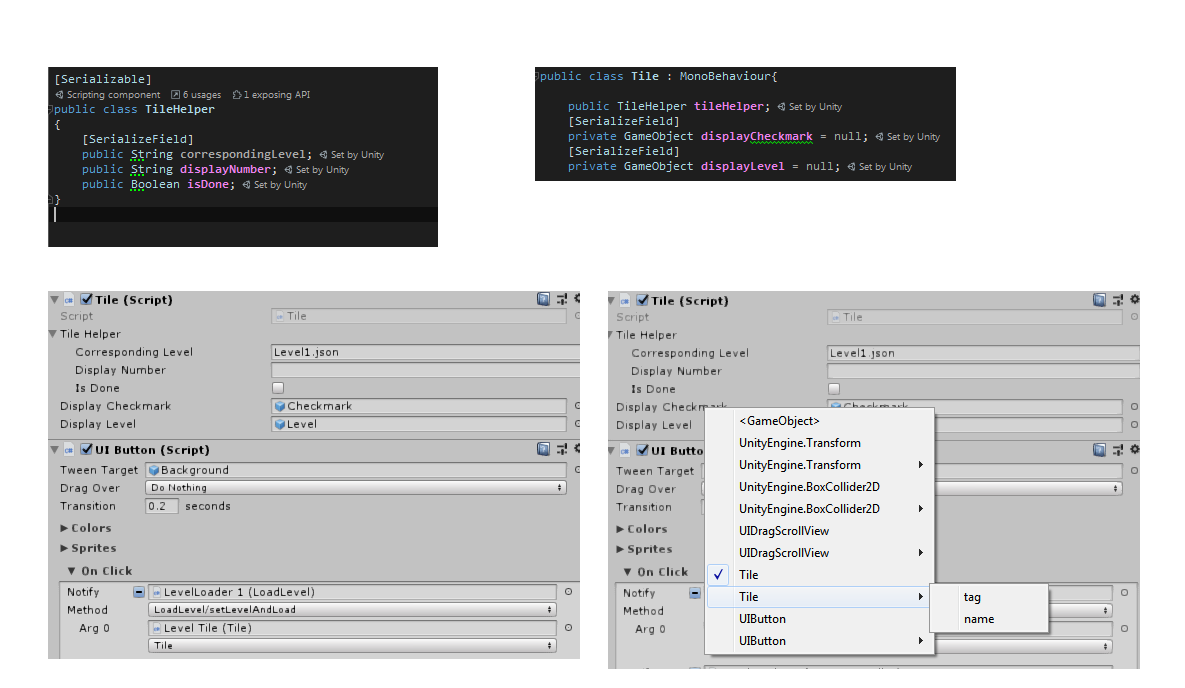 A UnityEvent, like the Button's OnClick event acts on methods, not on variables.

The reason it looks like it's setting variables in the cases you showed is that it's acting on something in C# called a property. That's where you define something like this:

This creates something that looks to your code like it's a variable: I can say exposedValue = 5 or if(exposedValue > 0) for example. But it "de-sugars" to methods: SetExposedValue(5) or if(GetExposedValue() == 5.

This is syntactic sugar to make it easier to write and work with simple getter and setter methods common in certain programming styles/patterns. In practice we'll often put validation/update/copying logic inside these methods, or make the getter or the setter private, to ensure outside interference can't put our internal hidden variables into an invalid state.

C# will let you sweeten this even more for simple cases that don't need extra logic, with an auto-implemented property:

Here we don't even have to explicitly declare and manipulate our "backing store" variable _hiddenValue - the compiler generates code equivalent to the example above.

Since the set part of this property is a method that takes one argument, our UnityEvent can call it - as long as the argument (the type of our property) is a primitive type (eg. int, float, string, bool...) or something descending from UnityEngine.Object (eg. GameObject, ScriptableObject, Component/MonoBehaviour/descendents, Material, Texture...)

So your Tile.tag & Tile.name examples are referencing the setter methods of the properties called tag and name, not variables.

Since your TileHelper isn't a primitive type or descended from UnityEngine.Object, we won't be able to assign the whole object with a button click event this way. But we could add some properties to set parts of it at a time:

Or, you could make your helper class derive from ScriptableObject to assign it all at once by reference to an asset in your assets folder.

Not the answer you're looking for? Browse other questions tagged unity ngui .

0
change sprite color from properties of parent object in inspector
1
Unity3D Tag as a public variable in editor
3
Assigning Objects when duplicated in the editor?
0
Unity Editor: Get Mouse coordinates on left click on Scene Editor
3
Get type of the object where attribute was declared - Hide In Derived Inspector Attribute
0
How can I make the loop only once when it's inside OnGUI?
0
Unity Editor stops updating ScriptableObjects if I click away from them in editor
0
Passing properties as arguments such that the resulting class can modify the original