How do you script movement of two or more characters at the same time?

For example, at the start of a conversation, its normal to move the characters to specific screen positions so that they can begin uttering dialogue much like actors on a stage. However, the only way I know how to do this is moving one character at a time, which you often see in many classic jrpgs. In the modern age, however we have a lot more tools and resources at our disposal, so it doesn't seem necessary to move them one at a time. Why not just have them move at the same time so the player doesn't have to watch a second or two of rapid sequential movement?

Is there a way to script the movement of 2 characters at the same time to fixed positions so that they can begin speaking cutscene dialog?

How does one script simultaneous movement of characters that is not random or looped?

I don't have enough rep yet to create an rpg maker mv tag.

The steps are fairly easy. 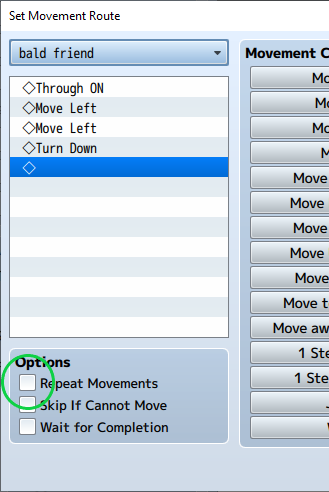 Test and the movement should work as expected at this point. Sometimes you have to do this more than once in an event if you have multiple sets movement routes that you want to happen at the same time. For each set you need to have one 'Wait for Completion' route at the end of the subset of routes.

Not the answer you're looking for? Browse other questions tagged scene rpg-maker-mv .

2
Showing Parallax entity and AutoParallax entity on same scene in AndEngine
1
How to create UI with multiple panels for multiple resolutions
2
Help understanding camera/scene Unity
3
How to make party members appear and move to begin a conversation scene?
0
My script to play the intro scene the first time the player hits play from the main menu wont work
3
Preload multiple scenes at the same time and activate them on demand in Unity. [Unity, async, simultaneous]
0
Why would the same script attached to multiple scenes not work the same way in some of the scenes?