How to compute the moves amount in a match-3 game?

I have a match-3 mobile game, similar to these popular games in the store. Mechanics are different, but the gameplay stays the same:

When you run out of moves, you have to buy moves or try again, so you have to think on each move.

And the problem is in the moves, I'm trying to calculate the amount of moves required for each level. I want it to be be slightly lower than the average, so it takes 3-4 attempts for an average player to complete.

I discovered that "being stuck" 2 or 3 times on a level makes it a lot more fun, than completing levels each time with a single attempt.

I have couple hundred players and with them - some statistics. With each level attempt (lost or won) I save it on my server to use it for calculations:

Which means that it takes the players 4 attempts, on average, to complete level 10. Then, based on that, I increase the amount of moves on level 10 by a small amount, so it's a little bit easier for them (because I want to achieve 3 on average). And I do that for each level.

The problem with that solution is that it can produce strange results, for instance if someone had 130 attempts (it happens sometimes).

Is there any algorithm, or mathematical trick to do these kind of things more accurately, like excluding edge cases etc?

I wrote a comment but I think it needs some pictures to be explained, so I'm writing an answer.

You can compute an histogram of these attempts. That is, you count how many players attempted 1 times, how many attempted 2 times, and so on.

Then, you can visualize such histogram using some software (python with the matplotlib module, for example). What you see will help you deciding how to modify the number of moves of your level. Let's consider an example of what you could observe: 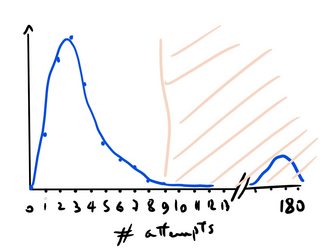 In this case, you can clearly see that there are two populations of players. One is attempting 'normally' a few times (less than 10) and then succeeds. The other population is extermely bad at playing and needs 180 attempts. Since the latter population is very small, you want to exclude those from your statistics (pink lines). It might be useful to use log-log scale or semilog, in your case, especially if you observe some very high values.

Of course, it could be much more complicated than that, for example if you have a somewhat flat distribution that does not have a clear mean. One needs to observe the data and take a decision. The histogram is a great way to do that.

Not the answer you're looking for? Browse other questions tagged mathematics level-design .

1
How can I fine-tune my movement values in a 2D block-based platformer?

11
How to balance experience gain in an RPG
2
How to be sure that a target goal in a match 3 game level will not be impossible?
3
How can I ensure the player learns all skills in a single open level?
1
Counting down a number of coins in the same total time duration, no matter the amount
5
Score balancing and progression limitation based on stars
19
How do I build interesting mechanics-driven puzzles for my stealth game?
1
What is the purpose of multi-staged levels in mobile games?
1
Dividing amount of exp between rank A and B into a curve?