Detecting a 2d collision is easy, but after that, I'm having trouble fixing the AABB position to where it should be. I think it would be something like e.x=obj.x-aabb.x1. but this obviously won't work for sliding on the ground, as the position will put to the front of the object. You could subtract the prev pos, but that is garbage in a lot of ways.

How can I make sure that the AABBs line up normally, and allow sliding on both axes?

2d collision-resolution aabb
Share
Improve this question
edited May 11 '19 at 18:16

Collision detection in games comprises of the following phases:

Collision response, in your case, is correcting the position of intersecting AABBs, based on some metric, which is computed within step 3, which you are missing.

The features of a collision you are interested in, is the collision normal, and penetration depth.

But to compute these, you will need to redo your collision code again, but in more detail, but first, let me explain a few points.

An AABB is comprised of 4 edges, each of which has a normal vector: 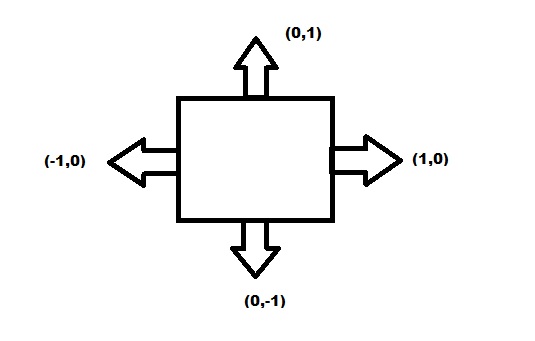 Now that we know this, we can use that information to measure the axis of minimum penetration :

Ok, that was a lot of pseudocode, so let's summarise it:

What this code does, is iterate through each axis, and project each of the corners of the box onto that axis (via the dot product). This allows us to know how far along the axis each point in, and thus, we can measure the overlap.

We can then compare this overlap to the previous value, and if it is both positive, and smaller, then it is our current best feature. Once the loops complete, then we have our minimum, and the axis that minimum resides upon.

Now that we have identified the axis of minimum penetration, we can now respond to it(see stage 4).

We can do this by moving one or more of the boxes so they don't overlap any more, or do something cooler, like use physics. It's entirely up to you.

Not the answer you're looking for? Browse other questions tagged 2d collision-resolution aabb .