Spawning units in a world made by Perlin noise?

There's some issues that I've come across in my Perlin noise-based game. Take a look at the attached screenshot below. 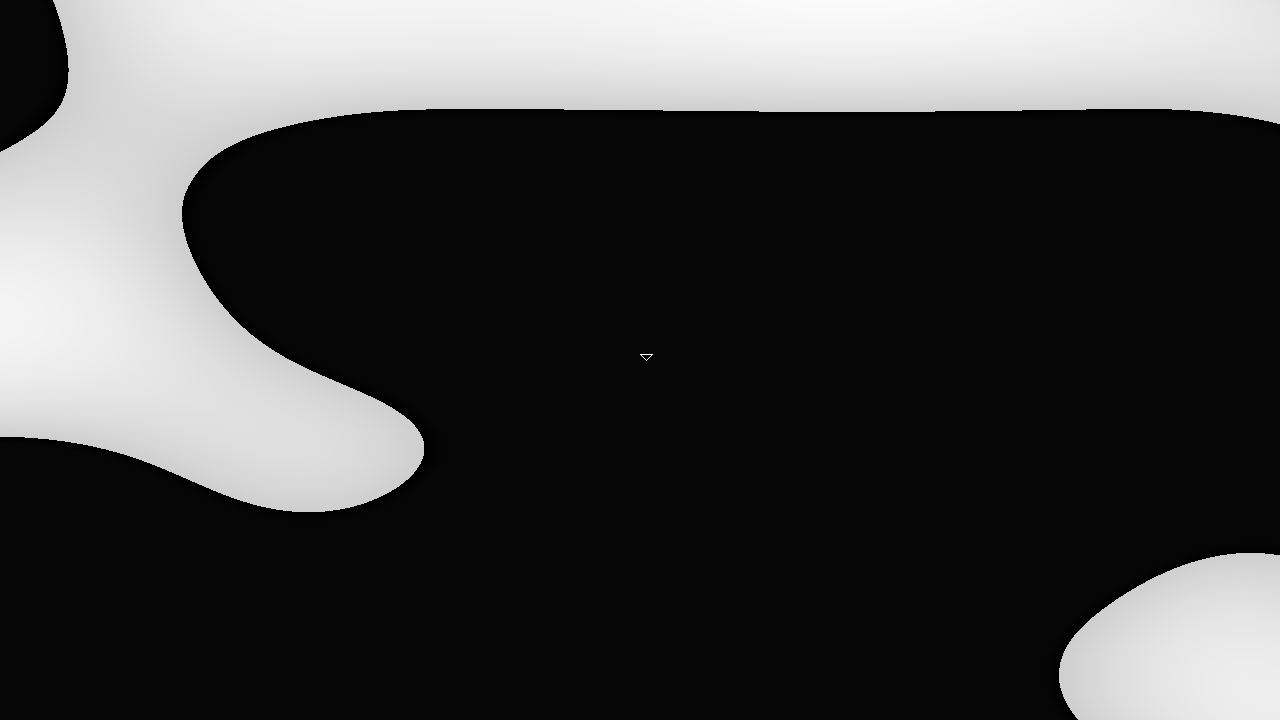 The white areas you see are walls, and the black areas are walkable. The triangle in the middle is the player.

I've implemented physics in this game by drawing it onto a texture (white or black pixels), and then getting that from the CPU.

However, now I stand with a different problem at hand. I want units (or creeps, whatever you call them) to spawn constantly, at the edge of the screen. The point here is that in the final game, there will be a "fog of war" that doesn't allow the player to see that far anyway.

I figured that I could just scan the pixels at the edge of the screen and see if their physics texture is black, and then spawn stuff randomly there. However, if you take a second look at the screenshot, there is (in the upper-left corner) an example of where I wouldn't want the creeps to spawn (since they wouldn't be able to reach the player from there).

Is it possible to somehow have the GPU determine these spawn-spots for me, or some different way? I thought about making vectors between the proposed point at the edge of the screen and the player, and then following it every 10 voxels, and see if a wall collides, before spawning a unit there.

However, the above proposed solution may be too CPU intensive.

Any suggestions on this matter?

Note 1 For the units spawned, I do not want to be using any form of pathfinding to avoid wall collisions as these units run towards the player. Therefore, the units must spawn at the edge of the screen, at a location where walking in a straight line towards the player would not collide with any walls.

There's a pretty useful algorithm for this job, much more efficient than the flood algorithm in this situation (its complexity is runtime is proportional to the boundary size rather than the flooded area): it's the marching squares algorithm. The concept is simple: start off the players location (screen midpoint), choose a direction and walk until you find a wall. When you collide with the wall, you start the algorithm: you choose an orientation (up or down) and start marching over the boundary of this area, highlighting the pixels. This give you the inner boundary for the allowed area. Afterwards, you simply check whether the candidate points for spawning units lie on this boundary.

This is the principle you should follow for running the boundary:

Wikipedia description (although it has alot more complexity because it's used with other applications in mind):

Make a flood fill from the player's position; every area "flooded" is then a valid play area, and all others are walls.

EDIT: As to the "reachable in a straight line" additional requirement, keep in mind that in a discrete space, you have to define this a bit further. For example, all of the paths above could be a valid "straight line" in such an environment, and I've seen all of them used in a game at some point or another: 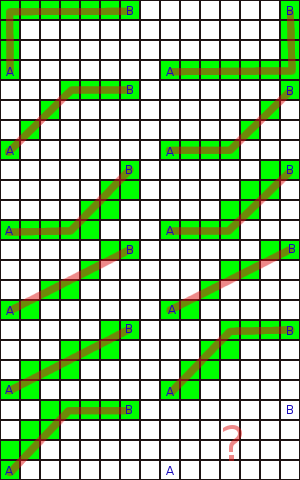 In particular, most of those aren't commutative - which means just because you can reach B from A in a "straight line" doesn't mean you can also reach A from B; neither is the opposite necessarily true.

In addition, there's the question on how do you handle diagonal movement if one or both of the "side" points is blocking.

How about just letting the spawns happen? I don't see any particular problem in that.

if it's important for you to only mark points with a valid straight line to the player you can use an algorithm like the following (it's a c++ code), it consumes more than than normal floodfill. there may be some minor bugs (I'll be glad if anyone corrects them) since i didn't test the code myself but you'll get the idea.

You can fill the map with colors that represents convex areas..., this way you can spawn your unit if lies in the same area. Or you can search easier for reachable areas.

This is static data so you can precalc it.

you had to fill the image finding points where there is a change from convave to convex, visually it's seems easy to find, you have two situations: 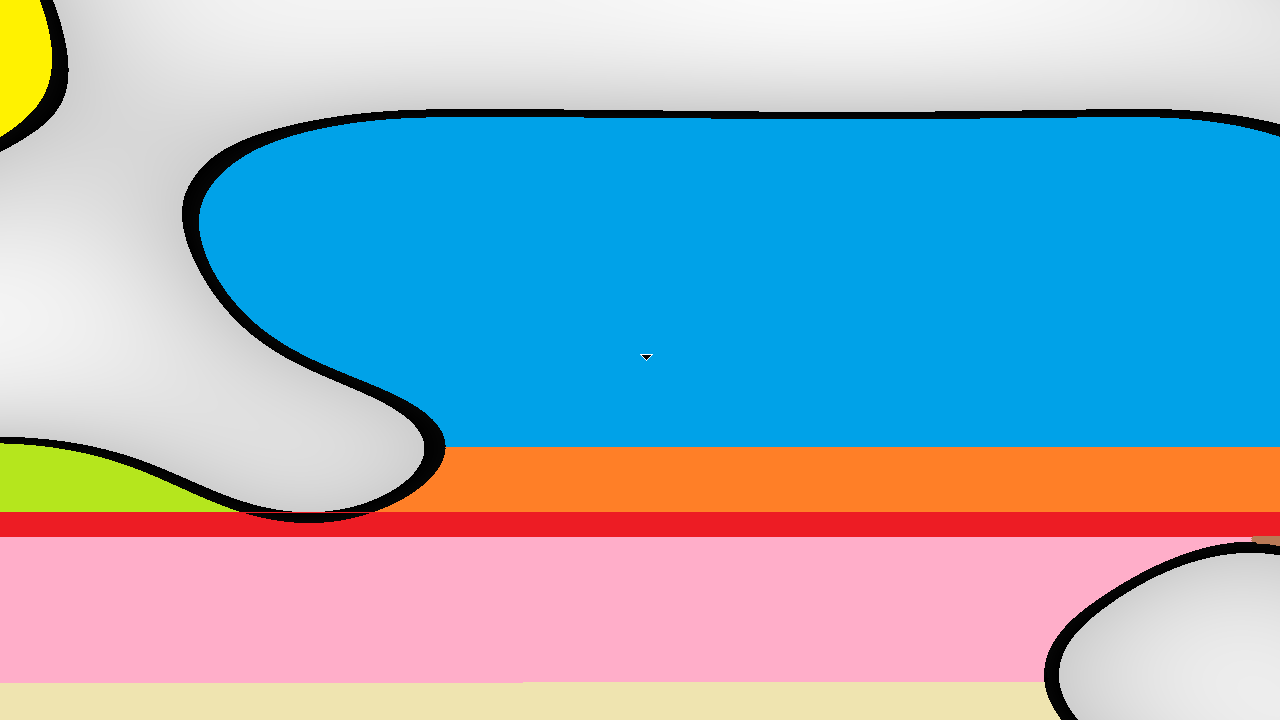 Here is something that I actually used in my own game (2d simplex noise generated world, almost exactly like yours)- Rays. Start at the player, determine a orientation (random if you want), and go along that line until you hit something (edge of screen OR asteroid). If you hit the edge of the screen (and not a asteroid/white blob), then you know there is a straight, open line from the edge of the screen to the player. Then spawn a monster at the point you hit. If you hit an asteroid, re-do the test.

Another (non-GPU) solution you can use is path-finding. Before drawing the map, path-find from each potential spawn-point at each edge of the map and see if there's a path to the center. A* path-finding is pretty OK on cost/performance, but you can do this before the game starts if that's an issue.

Not the answer you're looking for? Browse other questions tagged xna path-finding hlsl gpgpu or ask your own question.

5
Perlin noise - copying the algorithm on the CPU?
2
Odd offset bug in Farseer/XNA/C#
6
Best pathfinding for a 2D world made by CPU Perlin Noise, with random start- and destinationpoints?
2
A* in 2D grid with obstacles in between graph nodes
1
How can I test if one point can “see” another point. (XNA)
7
Cossacks game pathfinding
0
How to create a path-finder for a map like this?
0
How can I implement path finding with obstacles between cells?
2
Prevent navmesh blocking
22
Efficiently pathfinding many flocking enemies around obstacles