UI: Main Menu options for mobile games. What options should be listed? What do users want to see?

When a user arrives at your main menu on your mobile touch phone game. What do you want them to see? What do they need to see?

Start, About, Load, Leaderboards, and Settings are just a few of the options that I "could" put on the Main Menu. The question really is what "should" be there and why?

My game is about surviving waves of enemies to get to the next level, with a twist of course.

What options could/should be shown on my Main Menu and why?

As mentioned, users want to quickly get to the gameplay, after all, that's why they bought/downloaded your game. The most prominent option (or options) should take the user to the game. But, there's a few other things that might be worth including. Let's use some examples from popular (casual) games. 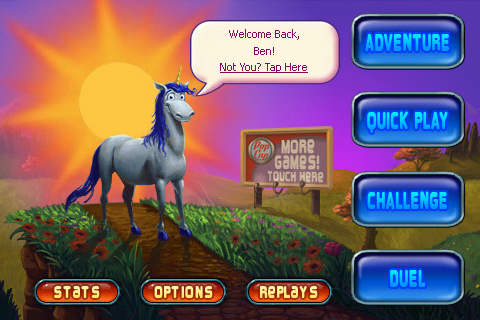 The Peggle Title Screen. There's 4 prominent buttons here, each of them taking you to a different game mode. These buttons are a bright blue, and stand out against the red/orange/green background. Even if you didn't know any English, you would probably be drawn to these buttons, and likely to click on them. There's also 3 smaller buttons, labeled with text explaining what each button does. They also stand out, though not as obvious, and it'd be confusing to know what to click on if you didn't know English. But the screens they take you to are generally important (options mostly, you want to allow users to disable or enable sounds, or possibly change control schemes, or something else) 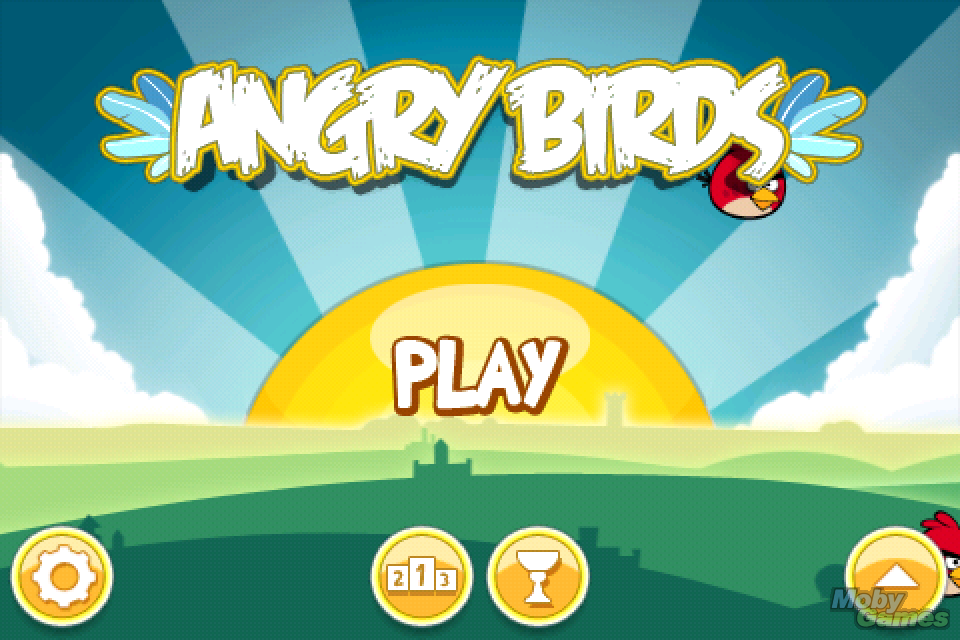 The Angry Birds title. In some ways, it's a bit more confusing that you can click on the "Play" in the middle (if you don't understand English), but at the same time, the word "Play" is in the centre of the screen in bright, bold letters. It's hard to miss, and the actual selectable area includes more than just the letters. There's also four buttons at the bottom, using symbols (which is great if you don't read English, but can be confusing to work out exactly what they do until you click on them). The left and right are the Options menu and a "promote the game" menu (this is true of the Chrome Angry Birds, I don't have the iPhone version to double check). Again, having an options menu is useful if you don't want to have sound going off while playing on the toilet or riding the subway. There's also Leaderboards and Stats/Achievements (again, these are best guesses in this case...), useful if you want to show off to people how much better you did at a certain level of the game.

So, what can we take away from all this? The key feature of a title screen is an easy, recognizable Play button, possibly a separate one for each game mode if your game has that. Other things to consider are Options, Stats/Achievements, Leaderboards, Level Solutions, and/or Promote the Game. Some of these are more important than others, and some of them might not even apply to certain games (Level Solutions is a good idea for a puzzle game, but useless for an FPS). It is important to not clutter your main menu, lest users get confused, but if you design it well, you can include all of these options and still make it obvious which one takes you to the game itself.

Your user is as interested in as few options as possible. Show them what they should care about and nothing more.

Ideally there would be as few clicks as possible to get into the game. So arguably, if you're supporting the ability to load a game, you might want to put "new game" and "load game" as separate buttons on the main screen instead of a generic "play" button that takes you to a sub menu as there's less input to get where you need to go at the cost of more buttons.

Not the answer you're looking for? Browse other questions tagged game-design interface or ask your own question.

5
what options do I have for rendering “large” terrains?
6
The Thin Red Line. What to present to get interest without showing too much?
3
What's the best presentation/terminology for “quit” functionality?
1
Who makes the art assets for mobile games?
5
Having 1 button for multiple purposes
4
How do you manage a crowdfunding campaign for an indie game?
8
Entity component system - game progression