First off, I know exactly what my drawing problem is, and I have various ideas on how to approach solving it. I am here to figure out how to adjust which frame is drawn so that the isometric "illusion" is maintained.

I am writing a 2D, birds-eye view game that takes place in space. I am trying to use isometric graphics in a world where Up is North, no rotating of the game world like in traditional isometric games (remember, the game takes place in space, no terrain). Here is an example sprite I am trying to use: http://cell.stat-life.com/images/stories/AsteroidOutpost/Spaceship64.png Rotated 64 times about it's own vertical axis with a viewing angle of 35 degrees (aka, iso). The image was generated, so this can be changed.

For the sake of clarity, I have dictated that North (Up) is 0 degrees, and East (Right) is 90.

My problem is that my sprite doesn't always look like it's facing where the game thinks it is due to a difference in the 3D planes used. Not sure if I'm using the terminology correctly, but my spaceship was rotated on one plane, and the view plane is expecting things to be rotated on its own plane. Here's a depiction of the problem:

http://cell.stat-life.com/images/stories/AsteroidOutpost/ProjectionIssue.png On the left, I have side views, on the right I have top-down views. On the top, I have the space ship/sprite sheet view of the world. On the bottom, I have what the sprite looks like when it is drawn to the screen.

In the top right is a simplified version of how my spaceship was rotated (even degree separations between each frame). In the bottom right is the angle that the sprite looks like it's facing when a particular angle is drawn on the screen. The problem is most evident at around 45 degrees. Here is an image that is overlaid with a "screen plane" line that is pointed in the direction that the ship is supposed to be facing: http://cell.stat-life.com/images/stories/AsteroidOutpost/Spaceship64RedLine.png The red line should always be pointed in the exact same direction as the ship, but as you can see, the projection issue is causing a problem. I hope I am describing the issue well enough.

It looks rather odd when this ship is shooting a laser beam at a target that is off to one side, when it should be shooting straight ahead.

So... the solutions that I have come up with are:

For one: Which solution would you recommend? I'm leaning toward 2, even though I know it's wrong. Remember that I have full access to the sprite generation tool. Method 3 would be my second choice. Both of these methods simply require that I apply some math to the angle(s) to get my desired result. Btw, I added #4 in there as a joke, I don't want to move to 3D.

For two: Using methods 2 or 3, how would I adjust the input or output angles? I'm not all that good with 3D projections, and 3D matrices (let alone 2D matrices), and whatever other math might be used to achieve me desired result.

Thinking out loud here: if I take a unit vector facing in the direction that I want the ship to look (on the screen plane), then project that onto the ship plane, then figure out what the angle between that projected line and the plane's north is, I should have the angle of the ship graphic that I want to display. Right? (solution for #3?) Man... I can't work that out.

I know the problem is hard to visualize with static images, so I have complied my Sprite Library Visual Tester to display the issue: http://cell.stat-life.com/downloads/SpriteLibVisualTest.zip It requires XNA 4.0 This application is simply rotating the sprite, and drawing a line from its centre point outward at the angle the game thinks the ship should be facing.

Continuing from my "thinking out loud" paragraph: Instead of using a projection (because it looks hard) I'm thinking I could take a north facing unit vector (0x,1y,0z), use a matrix to rotate it to the angle the sprite is actually facing, then rotate it again from the "viewing plane" outward to the "sprite plane" around the X axis, then... flatten? the vector (essentially project it) back onto the viewing plane by only using the X and Y (ignoring Z). Then using that new flattened vector, I could determine its angle and use that to... something something. I'll think more later.

I tried following my idea from above with some success, yay! So... to get a red line to look like it is coming straight out of my spaceship (testing purposes only), I did the following:

So, now I have an additional piece of information, but how do I use this to pick a more appropriate frame? Maybe instead of rotating from the view plane into the sprite plane, then projecting back, I should try to do it the other way around. Here's my sprite with an adjusted red line, but what I really want to do is to adjust the model, not the line: http://cell.stat-life.com/images/stories/AsteroidOutpost/Spaceship64RedLineCorrected.png

HORAY! It's fixed! I will describe what I did to fix it:

I followed eBusiness's advice and "squished" by world coordinate system (or stretched...?). This is essentially solution #1, although I was under the impression that I would have to rotate my world coordinate system in relation to the screen coord system. Not true! Up is still +y, and Right is still +x. I modified my WorldToScreen and ScreenToWorld methods to properly convert between the world and screen coordinates. These methods may not be optimal, but here are the only two methods in my codebase that had to change.

That was it! Changing those two methods affected everything else: what I was looking at, where the objects where drawn, where I was clicking, everything. My spaceship now looks directly at the target it is shooting, and everything is falling into place. I will be experimenting with the orthographic projection, see if it makes everything seem more 'real'.

When you have chosen isometric perspective you need to correct the scale between the X and the Y-axis. If a given distance projects to 1 on the screens Y-axis then the same distance will project to sqrt(3) on the screens X-axis. So if you draw stuff flat on the screen you'd do something like:

How is the rotated sprite generated? Are these screenshots of a rotating 3D model? The facing angle could be off due to the camera perspective of the 3D modeling tool. Isometric perspective is not an accurate representation of the 3D space. Stuff far away from the 'camera' does not get smaller.

If you just want a quick fix. Solution 2 might be difficult to get right. Solution 3 seems easy just swap the frames not matching the angle with one that fits the angle better.

The lasers will still be off sometimes. As you are not doing a smooth rotation but showing different frames for certain degree ranges.

Your problem is that the generated screenshots are not isometric perspective, but a normal 3D camera view. 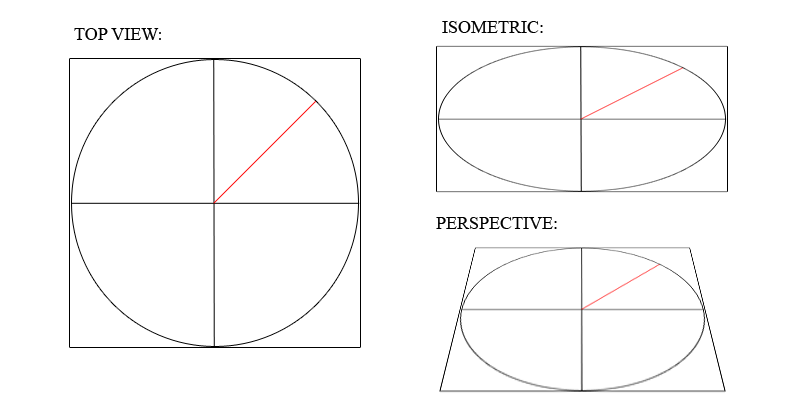 Isometric view simulates 3D space but is not an accurate representation. Things get smaller with increasing distance from the camera. This is not done for isometric perspective as this would cause ugly scaling artifacts in the sprite.

Your space ship screenshots are made with 3D camera perspective. Thats why the laser shooting is off. Compare the red line in the 'isometric' and the 'perspective'.

Your sprite generator should use Matrix.CreateOrthographic() instead of Matrix.CreatePerspective() for the projection matrix.

I think what you've got here is simply how isometric looks. You're right in that, visually speaking, there appears to be a larger difference between 0deg and 10deg than between 90deg and 100deg . . . but that's because isometric intrinsically compresses one axis. If you don't want that look, you don't want isometric.

That said, I think the visual issues you're having are thanks to not having a visual reference point. Your brain is assuming you're looking at it top-down - hey, it's space, why wouldn't you be - and so is interpreting it as a standard top-down view. For the sake of testing, try adding some floating holographic reference points. A 45-degree angled grid, for example, or a set of range circles around your spacecraft. Make sure they're appropriately distorted as if they were on the same isometric plane your spaceship is rendered on. I'd wager that your brain will figure out the perspective and it will suddenly look right.

Now, figuring out how to get that across to your users . . . that's another matter altogether.

Not the answer you're looking for? Browse other questions tagged mathematics xna-4.0 isometric spritesheet projection or ask your own question.