Finding a path with minimal number of turns on a grid?

There is a path, generated by my implementation of A*, where diagonals aren't allowed, and the heuristics is the Manhattan distance.

Is there a way to always or nearly always find a path with the least amount of turns? Even if it's a bit longer, and even if it costs more computationally.

Or is there a way to algorithmically "fix" a path later? Like on the image below, cut those long detours and replace them with those blue parts.

My current version is far from optimal, both length-wise, and both turn-wise. I also tried multiplying the heuristic value of a tile, if: 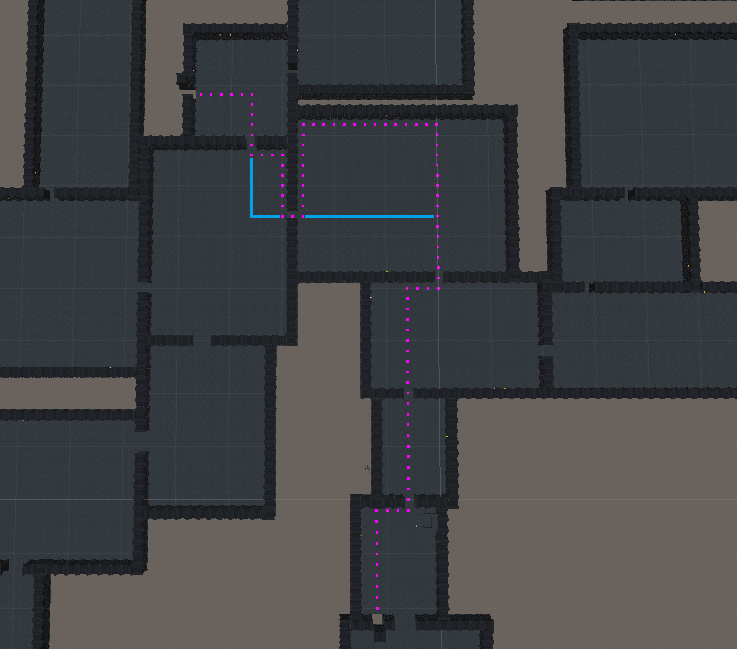 First fix your A* implementation so that it will find the shortest path.

Adjust the cost of the turn instead of the heuristic. This means that when you generate the neighbours the one going straight ahead gets cost 1 and the one where you make a left or right gets a higher cost depending on how large a detour you accept.

This means that every tile can get up to 4 nodes in the A* graph, one for each direction the entity can come from. For the purpose of A* you have to treat them as separate nodes.

It is fine if the heuristic underestimates the total cost, but not if it overestimates. So manhattan will still be good enough.

Not the answer you're looking for? Browse other questions tagged path-finding tilemap grid or ask your own question.

7
Path finding in grid for objects that occupy more than one tile
3
Fastest pathfinding for static node matrix
14
Finding shortest path on a hexagonal grid
1
Finding the “Important” nodes of a grid path
3
Path finding in 2D grid for objects that can rotate and bigger than one tile (Tetris)
0
How to configure A* for large 2D Grid based pathfinding, where paths could be long or short?
3
How to choose and scale heuristics for A-star on a graph?
0
How to force a sub-optimal path
1
Correct way of combining A* and funnel