Understanding the rendering of the raycasting on flat screen

I have a misunderstanding of the raycasting formulas on flat screen because my rendering is not what I expected, this is some parts of the code to show my projection formulas that I wrote by myself

This is the code for the function intersection

Code used for the raycasting algorithm:

For non-straight walls, I thought it was my variable types, it seems like not, I changed them from integers to double and i still got the same result, this is a look of my structures :

The trick here is to think of your image plane as though it was actually a flat object sitting in front of the camera, perpendicular to its view direction. This parallels the way the player's screen is a flat object in front of their eyes, perpendicular to their gaze - and this similarity is what makes the optical illusion of linear perspective work. 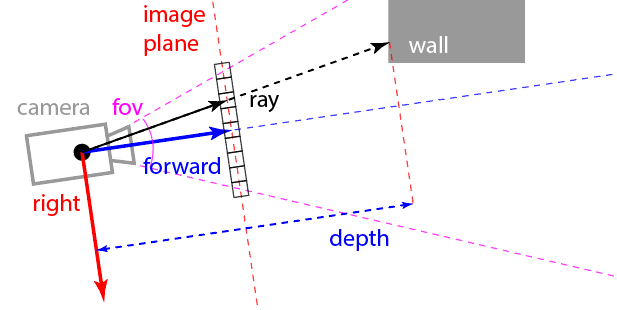 Following this line of thinking, each column of pixels on your screen corresponds to a specific point on this image plane in your game space.

Because the pixels on our screen are spaced out evenly, we need to space out these samples evenly in space along the image plane - I've visualized that with the line of little squares in the diagram above. So we need to find a direction to shoot each ray so it first "through" one of these evenly-spaced pixel points.

If we sweep our rays using equal angular increments like you do in this code:

then we don't get evenly-spaced points on our image plane - they'll bunch up in the middle and spread out at the sides, breaking our illusion. It makes straight edges of walls start looking bent.

In reality, the angular gap between adjacent pixels changes as we sweep our ray across the screen - with smaller angular spread at the sides and bigger strides in the middle:

So, working in angles can be a bit of a trap, and it helps to get out of angular space and into cartesian coordinates & vectors early. As a bonus, this will also save us most of our trig calculations! :)

First we'll need a unit vector in the direction the camera is facing, our forward vector. We'll use this a lot, so it's worth saving rather than looking up the trig values every time:

Next we need a vector pointing parallel to the image plane, to the camera's right. We can use a little trick to compute this from forward with no more trig:

And we'll need to now how wide to sweep from the center of our view to one edge.

We can calculate the direction the ith ray should travel like so:

You can optionally normalize or scale this direction vector as needed to suit your ray intersection routines.

To demonstrate that this works, I built a test scene in Unity that would render a series of cubes with the standard rasterization pipeline, then also fire ways and overlay a greyscale version calculated raycasting-style. You can see from this cross-fade between the two, the raycasting approach accurately reproduces the same linear perspective, with no erroneous curving of the walls:

Here's the code I use to fire my rays, and save the depths into a buffer to use in drawing the raycast version:

And inside the shader:

Not the answer you're looking for? Browse other questions tagged raycasting or ask your own question.

1
Ray Caster - How do I fix fish eye effect on side walls?

4
Direction vector in raycasting
3
Raycasting in Unity3D?
4
Raycasting problem
2
Raycasting Collision Detection
7
Raycasting “fisheye effect” question
0
Rendering a raycasting view
1
Finding the on-screen height of straight walls in raycasting rendering
0
Raycasting from an object to the center of the screen (crosshair) without clipping through objects