Spawning large numbers of navmeshagents causes them to jump position

I'm making a tower defense style game in 3D using Unity. I'm experiencing a frustrating issue with spawning large numbers of characters in an area of navmesh where if I spawn too many near the same location many of them will 'teleport' immediately after instantiation to near the navmesh destination.

Here's a doodle of one of the levels: 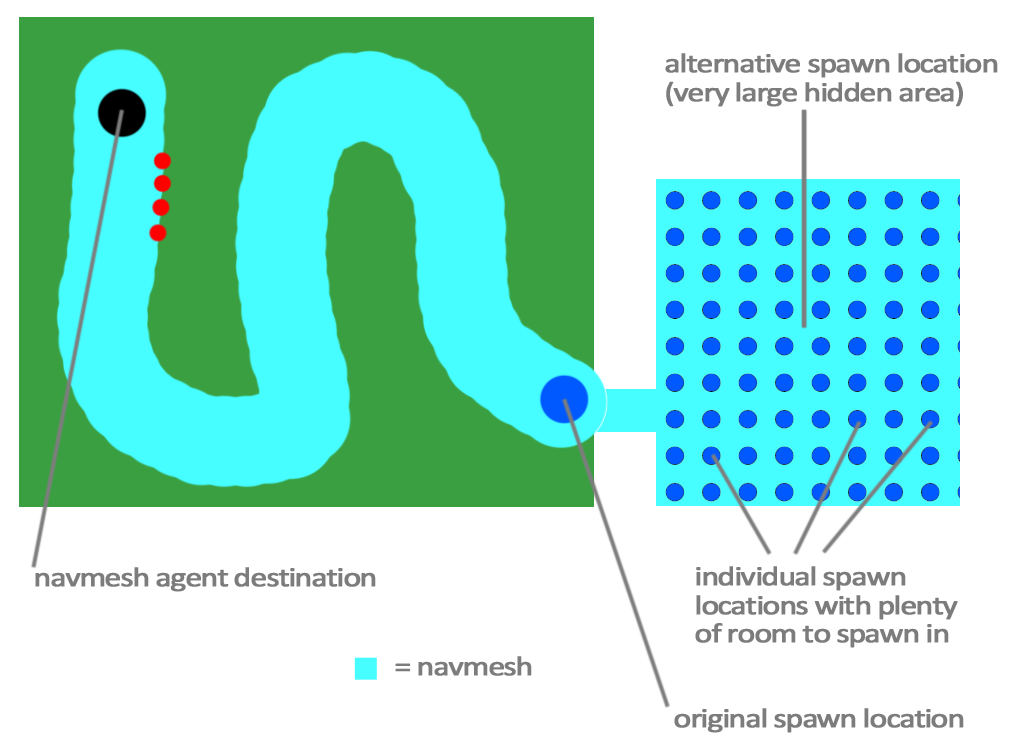 The black spot is the player base the NPCs have to get to. The green scenery has no navmesh and uses mesh colliders. Scenery is mostly steep hills forming a valley the NPCs should path through. It is composed of multiple meshes marked Unwalkable in navigation. The large blue spot is the first spawn location I tried, I later tried a larger area indicated in the right side of the image (see 'things I've tried' below).

When instantiating at the original spawn location if I spawn more than about 20 NPCs at once many of them will jump to the the area indicated by the red spots. The NPCs have a radius of about 1.5m, as do their colliders and navmeshagents avoidance property.

How can I spawn large numbers of navmeshagents in a short timeframe, avoiding this 'teleporting' behaviour?

Have you tried spawning them with disabled navmesh agents, and enabling the agent on each unit only when you want it to appear?

Also, it seem peculiar that they teleport to a specific area. Is there something specific there, which doesn't appear in the rest of the scene?

Not the answer you're looking for? Browse other questions tagged unity navmesh .

4
Convert large range of numbers to a smaller scale
35
How do idle games handle such large numbers?
0
Changes to one Unity trail renderer causes all of them to flicker
4
How do I add a smooth force my player's rigid body, to make them jump?
0
Large amounts of strings to be used, but how to store them?
1
In Unity, how do I set constant player numbers such that all network clients agree on them?
0
Architecture for defining large numbers of meshes at runtime
0
What causes this z position change?