I recently started to work on a project which consists in developing a game similar to the Urbz on Gameboy Advance (the Handheld version of the game developed by Griptonite Games). This is mainly a project to learn how to make a video game from scratch, especially one in 2D (isometric in this case). I'm planning to use C++ with SFML for this project. I already have some skill in programming, but since I would also like to draw the art by myself and have no experience in that I was wondering how I could do that.

Especially, I was wondering how did the the team behind the Urbz draw their art and what kind of technique was being used? It doesn't seem to me a 'handcrafted' kind of pixel art : 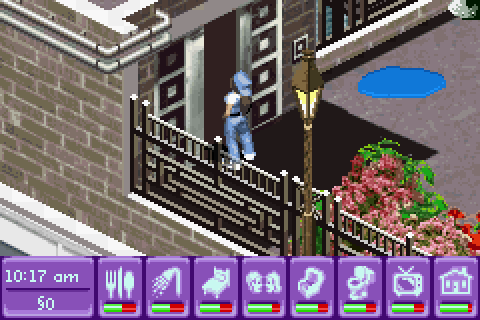 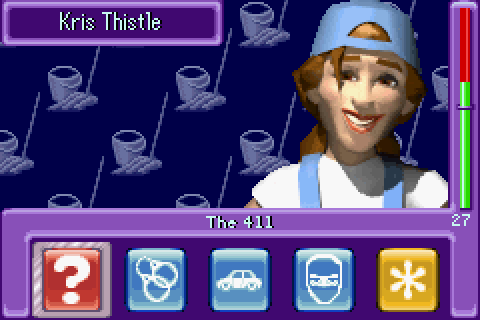 I also made some research about developing a 2D isometric game engine. It seems that a popular technique is to draw the map from an isometric tileset (as shown here by eishiya for instance). However the team from Griptonite Games seems to have used several big maps, such as this : 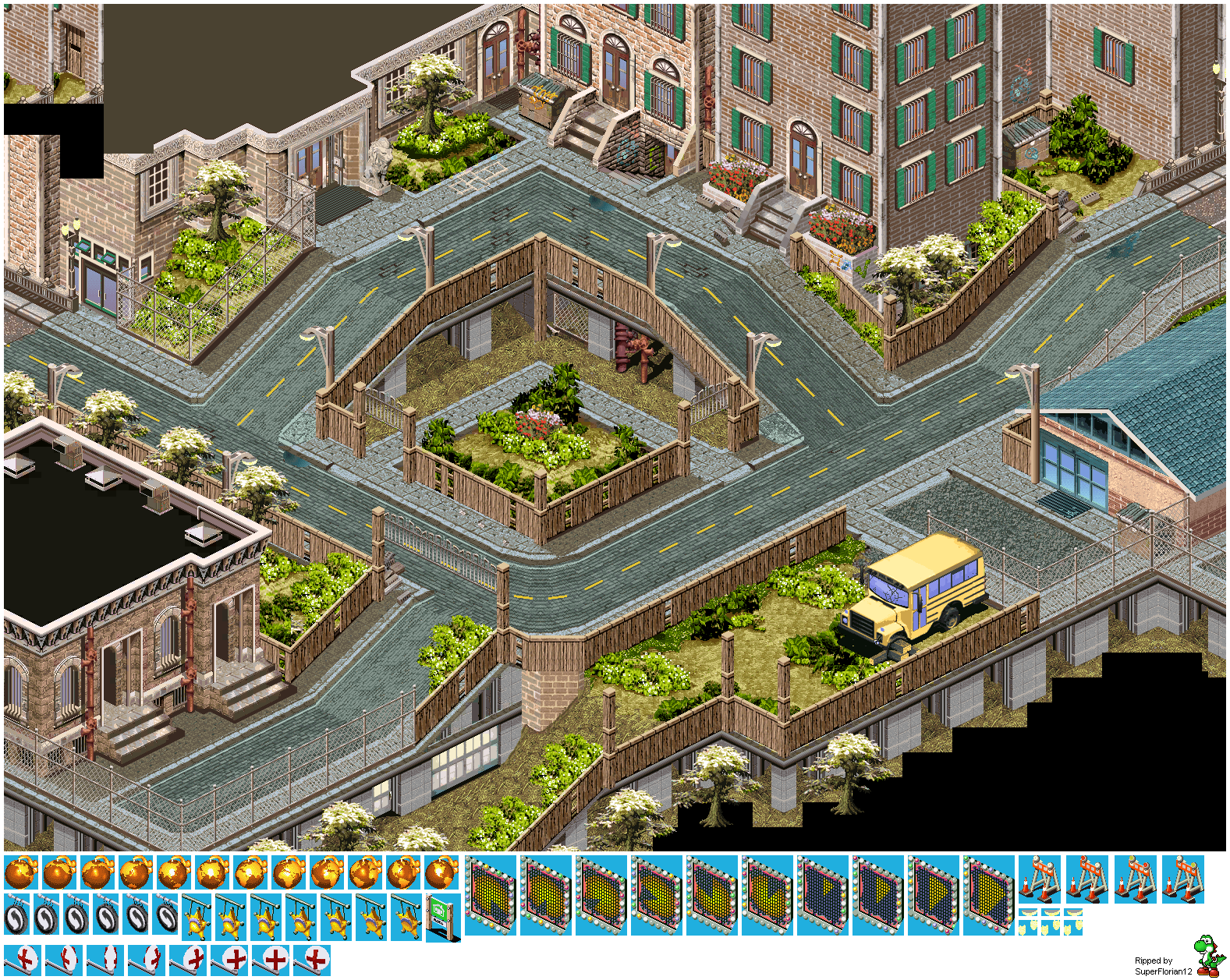 Or am I getting things wrong ? What kind of engine/technique might have they been using ?

Many thanks for reading this post (and maybe for answering too) !

Image description: A set of parallelograms composed of pixel lines with a slope of 0.5 or -0.5

"Isometric art" is literally just forms built primarily of lines that either run straight up and down, or have a slope of 0.5 or -0.5. There are exceptions to this rule in construction of forms, and this is illustrated by things like: the puddle, the flowers, and the curvy portions of the bus in one of the screenshots you shared in your question.

When you consider a 3D form that'd fit inside a cube-shaped bounding box, I want you to try and imagine that cube being distorted into a (when viewed in 2D) hexagonal shape built primarily from (you may have guessed it!) straight up and down lines and lines that follow the slope rule. The resulting perspective is what defines isometric art (imo).

Now, about achieving the exact aesthetic that Griptonite Games did, here's my best guess at their workflow:

1.) create a low poly 3D model that I'd like to work with. it doesn't have to be perfect, but it should be as close as possible to reduce work down the pipeline 2.) create a new camera and angle it until it shows the way i would like the character to be seen 3.) keeping my 3D modeling software's default lighting setup, i would then assign flat color materials to different polygon sets on the mesh. the colors should be as close as possible to the most dominant hue/shade/tint/tone that'd be in that given region 4.) look through the camera created and positioned in step 2, take a screenshot, and do a final pixel art polishing pass in an external 2D art program

1.) in a 2D art program, create or import an isometric grid (looks like cheesy wallpaper made of rhombus). layer this grid on top of whatever layer(s) you plan to create the art in, and optionally lower its opacity so you can see underneath 2.) draw, paint, or pixel your Big Map artwork on the lower layer(s), respecting or ignoring the iso grid as much as you'd like, but making sure to consider/follow the general guideline of vertical or +-0.5 slope lines during your construction of rigid forms such as buildings, vehicles, and other hard surface objects. for organic forms like people or trees, simply decide how many iso tiles they "stand" in (1x1, 1x2, 2x2, etc.), place their feet or whatever connects them to the ground strictly within that defined grid space, and then build them up to be the height that you'd like. The height of (organic) objects does not necessarily have to adhere to the iso grid, but you may want to consider defining a sub-grid that applies only to height so that you can define each object as being x units tall for a consistent feel, if that's something you're after 3a.) after completing your artwork, if you are comfortable with the asset just being one big image, feel free to stop here or to cut the whole thing into iso tiles to reuse for other artwork (works best if you strictly respect the grid) 3b.) if you want individual objects to be animated or move, I'd omit them from the big background, create them separately, and follow step 3a instead. otherwise just make sure to create each new object on a separate document layer to make it very easy to isolate them and export them as a transparent .png or what have you

You are right in feeling it doesn't look like 'handcrafted' pixel art! Hopefully this process will give you the results you need. If you'd like an example of how something made with this process would look in a game screen mockup, let me know in the comments! I can whip something up for you to help completely answer your question.

The following P.S. content is not relevant to the immediate answer of the question. All of that can be found above. I'm new to Stack Exchange, let me know if the post-scriptums should be removed completely. I'd like to be civil and avoid getting bombed by thumbs downs and/or administrative action if possible. thx <3

You state you're new to art, which is totally cool! My answer involves knowledge of external programs such as Adobe Photoshop or Autodesk Maya. If those/their alternatives are too intimidating for you to use on this project that is rather immediately happening (or is it in pre-dev?), I'd consider looking into other ways to achieve a similar effect, perhaps even just making hand made pixel art that emulates this style!

Not the answer you're looking for? Browse other questions tagged c++ 2d isometric art pixel or ask your own question.