Context: I am currently making the menu for my game demo. It involoves "Raindrop"-Gameobjects (Sprites) being repositoned and recolored after a random amount of time. I do this by instantiating a predefined amount of Raindrops and manipulate them after said amount of time.

I am using Unity 2018.1.6f and, if possible, want to avoid switching to another version. If it is of relevance and requested, I can also post my sprite import settings.

Problem: Upon repositioning a sprite, it keeps being rendered at its old position AND the new position, making it appear as if a new instance was created

(this isn't the case as 1. the objects in the hierarchy view remain the same, and 2. the unwanted "multiple renderings" aren't shown in the scene view either, only in game view)

As seen below, there are 5 Raindrop objects in the hierarchy as well as in the scene view. In the game view however, there a lot more than 5 Raindrops are being rendered. The amount of rendered Raindrops increases each time a single one is repositioned. 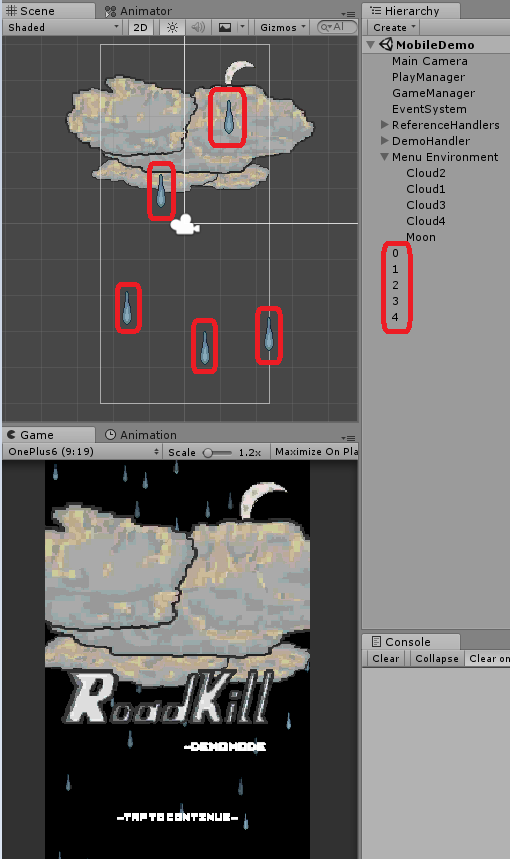 Further notice: I had a fairly similar problem once where a bug in my code caused it tho delete all objects at once. The objects were deleted but kept on being rendered and even functioning as if nothing happened, save for the difference that all moving objects would be rendered like the cards in solitaire once the game is over (I do not know of a different way of describing it). None of the code above, except for the Exit() function of MenuEnvironment destroys any object. As you can see, the rainbow objects are only instantiated once, upon Setup(GameObject, GameObject) and being continuously manipulated in Unity's Update Loop.

As user DMGregory Pointed out, the camera settings are what cause this problem to occur. The camera's clear flags option was set to "don't clear":

Setting this option to "solid color" (or whatever else is appropiate in your case) fixed the problem:

Not the answer you're looking for? Browse other questions tagged unity c# sprites bug .

4
Any way to combine instantiated sprite renderers into one texture so I can apply into a plane at runtime?
0
Image added to Canvas via script is not rendering
2
Instantiating, Inheritance, Objects and Children basics in Unity
2
Can I apply a force to particles from a script?
2
Flatten transform hierarchy at build time
2
To split or not to split large 3D objects?
0
Check if 2 objects with multiple colliders overlap using bounds
0
Problem modifying GameObject in list of GameObjects Unity
2
How to organize GameObjects into logical groups in a Unity Scene?