Mainly I built them and run because added several assets of the store and I wanted to see that there was no problem.

If at first glance everything worked fine. But I had the Task Manager open and I saw that the GPU had a lot of use 70% to 80% (I have a GTX 1080) and the game is 2D. My demo only has 22 sprites, without UI which I found very strange, so I opened the FireStorm (a Zotac GPU Manager) All the values of the graphics were extremely high (even started to sound a lot the fan) GPU core clock extreme high, GPU Temperature Very High, GPU Utilization Very High too.

But when I run the game inside the Unity editor, it's very normal values for a game with 22 sprites.

I continued making tests note that when the game is running the option of Graphic Quality in Fastest is selected by default, here the use of the GPU increases considerably 70% probe the rest and I have the following

So the problem apparently is in the quality configuration. What concept can be the one that generates this problem? Everything is by default in Unity until now

I have 5 scenes, only in 1 there is the problem. The scene has sprites that use Shader Weaver. I removed them and did the tests again. What I notice is that in the new build, when I run in fantastic I have the problem of high GPU consumption and in "beautiful" it increases to 40

In Quality Settings actualy have this 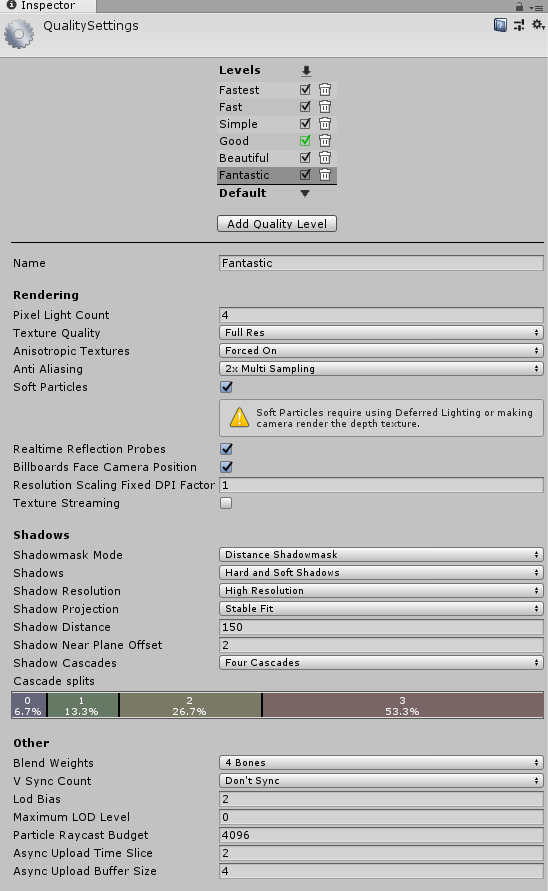 I understand that vSyncCount limit the update rate

Because the levels with the worst performance have the "Dont sync" option set, meanwhile Good and Beatifull is in Every V Blank

Browse other questions tagged unity assets windows build-process or ask your own question.

1
Textures quality issues with Libgdx
2
Unity Shadow shows on my Android device but NOT my Windows Mobile device
0
Unity using 40% GPU for just a UI interface on ultra but 90 on low?
6
How can I make Unity run fast when it's not focused?
3
Why are assets (images) in Unity build reported as 28 times larger
1
Reducing total file size of multiple Unity games