RTS game: How to handle disconnects in a fully connected peer to peer architecture?

I'm currently working on a game in which I am considering implementing a networking architecture as described in this article: http://www.gamasutra.com/view/feature/131503/1500_archers_on_a_288_network_.php

In order for the implementation as described in the article to work, all peers need to be interconnected without any exceptions. Like so: 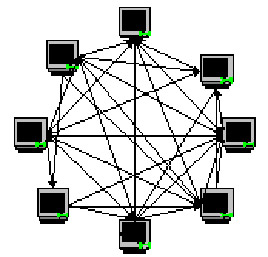 This works fine when everything is well. But I am wondering how to agree on disconnects in such a network. (Sadly something the article does not go into). It is relatively easy if one client goes down. Just give every client a timeout, and if a client does not respond for a certain time, it is removed from that client.

However, how should the system solve a case in which one client does not respond to another, but still responds to all others. In such a system the following could happen, resulting in a invalid state:

Of course this can be solved by giving one of the clients some kind of "master" role. It being the only one that can decide whether or not to disconnect other clients. But I'm wondering if it can be achieved in a pure p2p network.

Note I realize this case is not one that can likely occur "naturally". But I want to prevent players from being able to ruin a networking game for others by playing a trick like this by using the firewall for example.

First of all you need a way of detecting such issues and separate them from simple packet loss. Once you know you really have this happening and really need to work around this, there are several solutions you could try:

P.S. We have RTS topology with all packets routed through the host/server (option #2, to avoid the OP problem in the the first place) and recently started to struggle with packet counts, after raising players count in a game from 8 to 12 - that is 12 players, 10 ticks/sec, each sending message and ack = (1+11+11*2) * 10 = 320 packets/sec for each peer. Applying option #3 about now, iirc. If you have more questions, feel free to contact!

Not the answer you're looking for? Browse other questions tagged networking rts udp peer-to-peer or ask your own question.