Is GL_DEPTH_COMPONENT32 deprecated in OpenGL 4.5?

I'm in the process of migrating our object oriented OpenGL wrapper from 3.3 core to 4.5 core.

Some OpenGL implementations are notoriously permissive on what inputs they'll accept which can make tracking down bugs difficult. Wherever possible the inputs to our wrapper are validated with asserts to keep them in line with the spec.

Non-floating point 32bit depth types seem to be missing from that list which leads me to believe they're no longer supported (or at least actively discouraged). There's also this answer to another question which states that:

GL_DEPTH_COMPONENT32 is probably overkill, and as of 4.5, isn't a required format for OpenGL implementations to support (though 16 and 24 bit ones are).

I have tried to find some reference to this in the 4.5 core spec but turned up nothing.

Is GL_DEPTH_COMPONENT32 a deprecated size type? If so, why?

Typically, I've managed to find the answer almost immediately after asking the question. 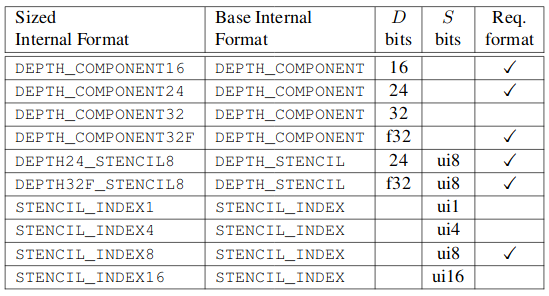 Implementations are required to support at least one allocation of internal component resolution for each type (unsigned int, float, etc.) for each base internal format.

This seems to say that yes the format is deprecated. It appears the format is not deprecated but is now optional and may not be available on all OpenGL 4.5 implementations. The reason is that only one type (int, float, etc) needs to be supported for each resolution (8, 16, 24, 32, etc).